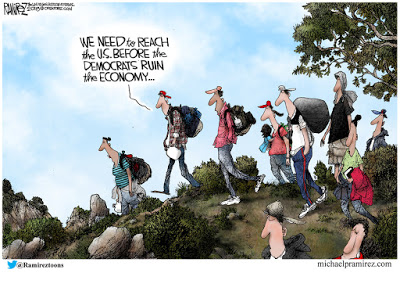 The Mexican Border with the United States on both sides, but more particularly on the American side, is covered with trash. (more HERE from Lagniappe’s Lair) The trash and human detritus is left behind by millions of illegal aliens who cross the border illegally every year.
You shouldn’t be surprised to find the trash because they treat our country in very much the same way as they treated the various countries that they are leaving.
Most are in search of jobs, some are hauling drugs, some are freeloaders in line for the many financial rewards available (particularly in California) for the newly arrived wetbacks/illegal aliens/undocumented guests/Democrat voters. Only in California are the illegals invited to vote early and often. You don’t need any ID to register to vote in the Golden State, only a name (not necessarily yours) – one or many names, all OK in CA. To accommodate homeless voters, you no longer need an address. How can a nation function with rules like that? It can’t, but don’t worry. The coming Ice Age may force all these illegals south again…

(LINK – house.gov) There is considerable damage done to the environment according to the US Dept. of the Interior. “National parks and forests have been turned into personal landfills for illegal border crossers, etc.” 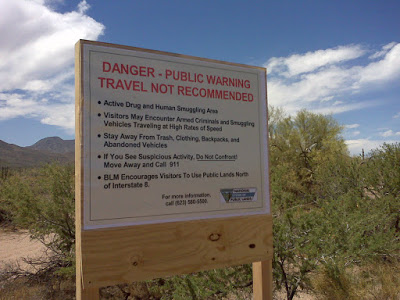 If you take your short wheel base/high clearance vehicle down to the Southern Border you are likely to see signs like this one (left). You’ll be encouraged by the sign and by the Border Patrol to use public lands north of I-8, because the area south of that is a sort of no-man’s land.
Cutting for Sign when tracking illegal aliens is a difficult proposition for US Government employees involved in securing the border from those aliens. There is so much trash and there are so many illegal aliens crossing, that tracking one alien or a specific group of aliens is challenging.
The question of why this has been allowed to exists is a complicated one. The Democrats want more illegal alien voters and many Republican Party supporters want inexpensive labor for their farms, factories and ranches. I submit to you that both parties have dirty hands where this situation is involved. We owe a lot to President Trump, who has taken flack from his own party as well as the donkeys for wanting a wall and effective border enforcement. The caravan waves that we see on the Southern Border are in large part due to conflicting messages sent out by liberals in America.
Should we close the US Mexico Border? Maybe it will come to that. But it will certainly impact the economies of the border areas. Hundreds of thousands of people who work legally in the US cross the border every day to go to work. It’s less expensive to live on the Mexico side and “border crossing cards or so-called Laser Visas” are used to expedite crossing. Lawful agricultural products from Mexico would rot on their side of the border and you would note that the produce you’re accustomed to seeing on your market shelves wouldn’t be there.
We need an effective barrier, a wall. We need more immigration prosecutors and judges to EXPEDITE all legal situations within 30 days for each wetback/illegal alien/undocumented guest, and we need to expand the US Border Patrol’s numbers. Essentially putting an army at the border.

Meanwhile in California – Gov. Jerry Brown has set aside an extra $15 million in the state budget to expand legal defense for people battling deportation. This brings the total of the state government’s financial aid for those in the country illegally to approximately $33 million. There is considerably more focus on saving illegal alien voters in CA than there is fighting wild fires.