One Nation Under Drones (Book Review) 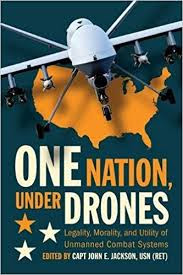 One Nation Under Drones: Legality, Morality and Utility of Unmanned Combat Systems


CAPT John E. Jackson, USN (RET) Editor
Published by the Naval Institute Press.
It’s a very large topic with breadth across and under the waves as well as over them. 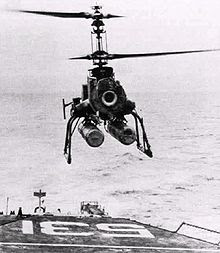 The US Navy has had unmanned systems since the late 1950’s and the DASH. (Drone Anti-Submarine Helicopter). Essentially it was a small helicopter that flew off the deck of a Destroyer (usually Fletcher and Sumner classes) and dropped a torpedo on a submarine contact.

(1) The manned Gyrodyne Rotorcycle program of the mid-1950s provided prototype work for the DASH. (2) The Rotorcycle was modified to produce the initial drone version, the DSN-1/QH-50A The DSN-1 was powered by a Porsche YO-95-6 72 hp piston engine and carried one Mark 43 homing torpedo. (3) The next developmental version was the DSN-2/QH-50B that was powered by two Porsche YO-95-6 engines and also carried a single Mk 43. (4) Serial production of the DASH began with the third version, the DSN-3/QH-50C, in which a 255 hp (190 kW) Boeing T-50-4 turboshaft engine replaced the piston engine and the payload was increased to two Mark 44 torpedoes. A total of 378 QH-50Cs were produced before production ended in January 1966.
The development of communication systems with reliable spread spectrum hard cryptography and fast enough processing power to enable them to handle a large hash has been the key to the widespread expansion of larger drone systems and to their use in a combat environment.  Naturally, they wouldn’t be flying everywhere on the planet without satellites, and for that (among other reasons), the US has created the US Space Command as a separate branch of military service. Protecting satellites and space-based assets assures us of the capacity to operate drones, upon which we are becoming increasingly dependent. 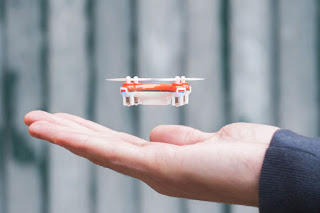 The book takes the topic from drones the size of a Boeing 737 to drones that will fit on the palm of your hand. It’s not just about military hardware. And the ethics are not just about national security. Personal privacy are increasingly of concern.

One Nation Under Drones does not overthink the topic, nor does it trivialize any portion of the ethical and expanding use of drones. It’s a good book for the casual reader and the industry professional who is interested in the drone revolution.