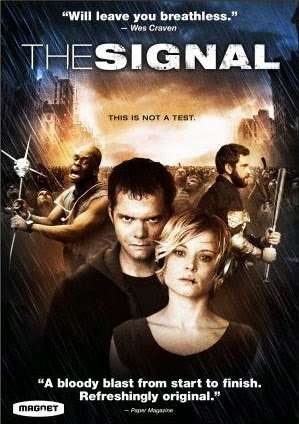 When did you first encounter the Signal?

Either you like it or you don’t. It’s part sci-fi, part thriller, part mystery with a splash of horror thrown in to keep you guessing.

A mysterious hacker known only as “NOMAD” has been messing with Nic and Jonah, and when they’re able to pinpoint his location, they decide to pay an unscheduled visit. Their directions lead them to an isolated area, however. Suddenly, there’s a flash.
When Nic regains consciousness, he finds himself trapped in a waking nightmare. He’s groggy and injured, and sealed off to boot from Haley and Jonah. A man in a hazmat suit, Wallace Damon (Laurence Fishburne), keeps Nic in isolation, informing him that he believes he may have come into contact with aliens. Eventually Nic escapes his enclosed compound, but encounters a number of strangers (including Lin Shaye) who force him to further re-evaluate his impressions of his situation.
The cinematography is excellent. It’s a visual template that is worth experiencing and it leads to the film’s building and the menace that you feel while watching it.
No spoilers because the signal is all about encountering the film.
I give it 6. 5 out of a possible 10. That means that it’s worth seeing once whether you go to the movies or wait for it on HBO.