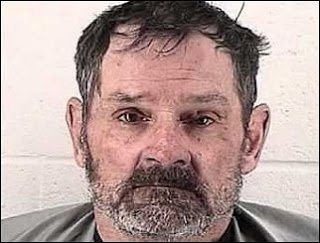 The strip mall was dark by the time we got over there so we went to the gas station, generic label with a convenience store. Highway on one side, decaying strip mall on the other. Tires, car parts and junkyard effluvium were stacked against the back of the store.

I followed Tom along the store counter, its pornography and cheap impulse buys, displayed below countertop level. The tobacco stacks were behind the counter where Gloria sat. At least that’s the name that was on her smock. Gloria looked country, large, corn-fed and plain, wearing a work vest and sitting in a chair at the end of the counter. Even though she was working, she drank from a fresh 44 of malt liquor—a ribbon of tattooed stars wound its way out of her collar and halfway up her neck. Tom asked her about the preachers at the strip mall. She remembered most of their names and recited them to Tom. She knew Mary too and thought that she may have driven away with one of them.
“I guess she’d gotten into the Christ again. Or something. It’s that fat Pentecostal snake handler, Homer Trumpet they call him. Real last name is Sneed. Him with with the club foot, who drove her away. She told me it was just for the night. He promised to witness to her.”

“What about the Anglican?”

“Nah, not him, he played it too straight.”

“She come around much?” Tom asked her, brandishing the star.

“I hadn’t seen her in a long time, and I could tell things were hard on her. I shoulda helped out more, let her sleep in the back or something. I think she’s on the run, but she didn’t say nothing about the law. There’s this, like, women’s shelter? It’s outside the hill country, um, up near the highway before Springdale. I know Homer Trumpet takes girls there sometimes. Past where the Wal-Mart is. They pay him up at the Ranch by the head.”

“You think that’s where she went, Gloria?”
Gloria looked up at me with vacant eyes. “Maybe. She danced down at the club afore she came here. Maybe Homer took her back there for a bounty? Honkytonk about five miles south of here on the highway. If the preacher is done with her, she’ll be working there or at the shelter if you ask me. And you are asking.” She looked hopeful.
I dropped a ten on the counter and she swept it up. Tom looked at me with a protest in his eyes. He walked to the liquor counter and grabbed a bottle of Yukon Jack. “This seal is broken. I’m taking it as evidence.”
Gloria shrugged and took a pull from the bottle of Cobra.
Inside the empty strip club, I watched a homely woman gyrate lethargically on a pole for no audience. Tom spoke to the manager and showed him a mug shot.
“I gave her a couple day shifts back a few days ago. She only showed up for one. Wasn’t good- looking enough for me to put up with that kind of shit.”
A lady came out of the back wearing a bikini bottom and haltertop. “Want a lap dance?”
She looked like a cut-rate streetwalker. I declined. “You know of a women’s shelter somewhere around here?”
“You mean the Ranch? It’s advertised to the bible thumpers and do-gooders as a shelter, but it’s not. And they know it’s not because they pay for the down and outs and run-aways.”
“How would we get there?”
“It’s up in the woods south of Foley. The Sheriff there is half owner.” She scrutinized Sheriff Tom, then spoke to him directly, “And he doesn’t want no other cops as partners, I expect. The judge sentenced me to thirty days there once and they rode me a lot harder than I’m ridden here for no money at all. There’s a loop off the shoulder before it hits the main road. Go down a dirt fishing road toward Old Jim Creek. When you come to the end of the road, you’ll be there.

Tom started a plug of Red Man. I passed on the tobacco. “You didn’t beat no woman, you don’t chew no mo. What’s got into you Willis?”

Tom drove, I pondered on the events of the evening, on the snacks he laid out for me in the back of the car, and on circumstances in general. “Since when have you seen me beating on a woman when a polite question gets so much farther, Tom?”

He mumbled and spit out the window. We stopped at a motel and ate at the greasy spoon attached to it.

In the morning, we followed the directions to the county women’s shelter, consisting of a group of mismatched trailers and shacks, formed in a circle like a wagon trained nestled
in an overhang of trees. Swamp coolers ran in sympathy with each other like a gang of angry cicadas. Laundry hung limply between the trailers in the morning humidity. Up a dirt walkway, a sign, ‘reception’ had been attached to the metal flanks of a trailer.


Two pick-up trucks were parked in a gravel lot, both beaters. One had a patriotic flag sticker to remind people of the War of Northern Aggression attached to the back window glass. The other truck was sticker-free.


Tom stopped me as we walked up to the reception door, “If anyone stands in our way, I expect you to give them a beat-down, Willis. That’s why you’re here.”


“Tom, you’re the one with the gun and the badge. You’re an elected county sheriff.”


“I know, but you know how people are these days with peace officers being violent. It don’t look none too good. What with me having to stand election, I have to be careful. And once this Mary Kinnings is out of the way and planted in the ground, things should be smooth all the way to another four years in office.”


The wheels turn in my head slower now than when I didn’t drink.  Sometimes I think that a gear or two inside my skull is missing a few teeth, but I was sure that I heard him say that the witness hoor that he’d been seeking would have a different fate than that one he described when we started out on the little jaunt.


I grabbed Tom by the arm, and I might have grabbed him a bit harder than I intended because he stopped and sort of crouched, with his head down. “Did you bring me with you to help you murder a hoor who did nothing more than screw a great man and get caught up in a mess not of her making?”

Sheriff Tom became more compliant as I squeezed harder, “The scruffy little bitch knows too much, Willis. If I told you that, you’d never have come along.”


I pulled the revolver out of Tom’s holster and tucked it in behind my belt, then I let him go.