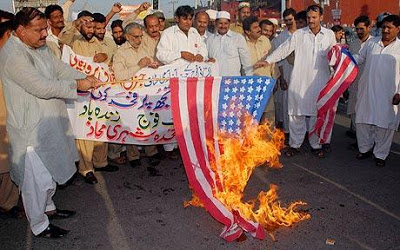 Facebook
Twitter
Pinterest
WhatsApp
Word has gone out that death threats* are being issued to bloggers who oppose foreign aid to Pakistan. I hadn’t thought to post this and thought that my last blog post was sufficient – but apparently it’s not because Pakistanis are not lining up to kill me the way that they are for other bloggers. This is an insult that I hope to rectify with this blog post.

*It is possible that an enterprising Indian is sending out these death threats. If you’re a Pakistani and you’re calling for my demise, please put your city and your home address on your death threat so that I can vet them. I’d hate for Indians to get credit when you, a real Pakistani plan to send me off to collect my seventy virgins. –Thank You, Virtual Mirage Management

I get it. You’re a Pakistani and you thought a lot of Osama Bin Laden (OBL). You’re mad that the US took out a guy you worked very hard to protect. I feel your pain. You on the other hand must agree that the billions of dollars that the United States pours into your nation which funds the national military, which at the very least tacitly protected OBL, should stop.

Pakistanis burning an American flag, one year ago.
Yes, I get it. If we don’t keep feeding Pakistan, they’ll slide from being a third world nation to fourth world nation status and will become a haven for terrorists….except that we’re there now. I can’t recall any Americans burning Pakistani flags. Am I the only one that finds this interesting? However, we do send you (Pakistanis who will be calling for my death soon) billions of dollars. — AND you don’t burn the money. You spend it.
Now (hopefully) you won’t have to worry about the moral imperative to burn the money we send anymore.
ELIMINATE  US  FOREIGN  AID  TO  PAKISTAN