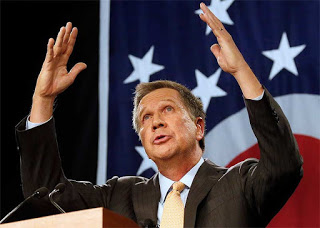 I heard somebody call Gov. John Kasich a “dweeb” the other day. Dweeb means, “Dick with eyebrows.” I don’t think that’s true. He’s not a walking penis. The other word used in association with Gov. Kasich is “wonk”. The definition of that word is, “A person preoccupied with arcane details or procedures in a specialized field.” He’s definitely a wonk.
Some uncharitable people suggest that Kasich might be a secret member of the Trump team. The Ohio governor has been mathematically eliminated from contention for 1,237 delegates, but, after spending the early part of the primaries as an anti-Rubio spoiler, is now set to be the anti-Cruz spoiler. With Kasich in the race, Trump gets to 1,237 and without Kasich in the race, Trump falls short. Since Kasich’s only path is a contested convention, this makes his campaign, on top of everything else, a massive self-contradiction.
In other times, he would have obtained the mantle of “favored son of the GOP elite” and money would have poured into his campaign, but he has a track record of finishing fourth in a field of four. He even finished fourth in Arizona behind Rubio, who had dropped from the race a week earlier.
But Kasich soldiers on, giving hugs and suggesting that everyone get along and get behind the Washington Cartel (as Ted Cruz calls it – he may not be calling it that anymore because he’s now the anointed party favorite because as much as the elite GOP hate him, he can be bought and Trump is not a reliable purchase).

Kasich reminds me of a talkative and somewhat boring neighbor, prone to self-righteous rants. While it is true that if experience mattered, he’d be the front-runner, nobody cares about that this election cycle. Maybe the country doesn’t want the barber who rants while cutting your hair running the country? Even if he gives you a hug.

In other times, John Kasich would be a Democrat. It’s in his DNA, it’s his platform. Read it. He’d be slightly left of John F. Kennedy. Today with a 74 year-old communist and the Bitch of Benghazi leading the Democrats, he’s a Republican. But not a loved or even desired Republican outside his home state of Ohio. And while he considers himself America’s hope, Kasich advocates taking in Syrian and North African refugees. Maybe the recent terror attacks in Belgium changed his mind but he seems to think of himself as being too cool to do that.

The question that I have for you Kasich fans is whether a delusional candidate whose hubris extends way beyond profound obsession is better than a conservative nationalist like Trump or a  conservative preacher (and husband to a Goldman Sachs executive) like Cruz?