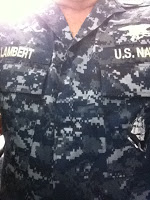 The photos referenced here are of the newly adopted Navy Working Uniform. Many service members and former service members feel that it was designed so that if you fall overboard, they won’t be able to find you as you bob about in the ocean attracting sharks. Because you’ll wear boots, they will aid in sinking you because you’re not going to be able to kick them off the way you could with shoes.
Perhaps today’s sailors and officers don’t plan on going over the side into the drink. Maybe they’re simply better trained as members of the World’s Finest Navy (The fact that it is the World’s Finest navy can’t be disputed).
I realize that most of you don’t care in the slightest, but the “digital pattern” for navy work uniforms mystifies me even though the Navy defends their decision in the official statement (below):

By using colors that are traditional Navy colors, we continue to uphold our naval heritage, while giving our Sailors a uniform that is much more practical for our working environment.

Why the ‘camouflage’ pattern?
The concept uniforms are not intended to be ‘camouflage’ uniforms as is the case with similarly patterned uniforms of the other services. We have no need for camouflage. However, by learning from our past working uniforms as well as the uniforms from other services, the Navy realized that a solid cover uniform shows heavy wear areas much more predominantly than a multicolored pattern.

The solid color uniforms also show wrinkles in the fabric more predominantly and often a small stain or spot of paint renders a solid colored uniform not wearable. A multicolored uniform alleviates those problems as well. 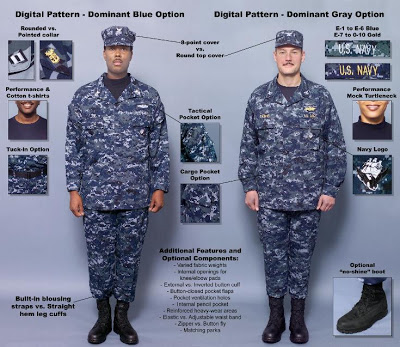 If you’re going to ‘calk off’ on a ship of war, the digital design (not camouflage as the Navy asserts) will not hide you any better on the haze gray decks than blue dungarees did for your daddy’s navy.