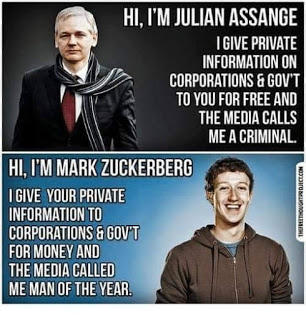 Facebook
Twitter
Pinterest
WhatsApp
I’m not sure what constitutes “journalism” in 2019. I don’t consider that my blog is “journalism”, but you’ll find more truth here than in the greatest bastions of American journalism: The New York Times and the Washington Post.
In truth, and by most definitions of output, what is the difference between the New York Times and Wikileaks? Is Facebook an expression of Journalism? What about Google? What about state-run-news outlets such as Pravda?

Views of a dystopian future as found in Orwell’s 1984 or in Rand’s Atlas Shrugged portray a media that has been totally co-opted by the state and operates as an extension of the state. Today, we question whether the Deep State (which controls the media) runs the nation or are we a Constitutional Republic? It’s a an uncomfortable question. The corrupt, lying, filthy, sly, smug, elite media reacted with shock that the Attorney General would say that the Obama Administration spied on the Trump Campaign, but it’s been an open secret. Only in the hallowed halls of journalism has it been something that was not discussed.
Journalists tell bloggers that they (the journalists) have professional ethics, but to be frank, I haven’t seen much if any of that over the past decade. Quite to the contrary, I find that the media is increasingly shedding its mantle of respectability and we can all see the rot that has been concealed beneath that cloak.