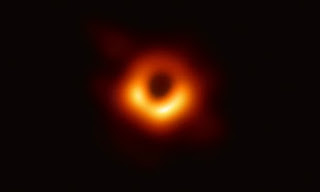 Facebook
Twitter
Pinterest
WhatsApp
It’s not a photograph, because the astronomers who captured the image of the star becoming a black hole/singularity didn’t use cameras. It’s not an image of a black hole, because that’s not possible. It’s a composite image of the energy escaping the accretion disc that surrounds that black hole, rendered from the data collected by the coordinated efforts of the staff at several radio telescopes scattered around the globe to image this object.

I’m sure when they manage to increase the resolution available via those radio telescopes, or improve the algorithms that render that data into visual imagery, we may well learn two or three years from now that the lopsided orange blur that amazes us today has many features and facets we can’t see now. It might not even be orange. Science being science, the science is never settled. Science journalism being what it is, they might have oversimplified immensely.

From these images, theorists and modelers on the (observation) team have determined that the black hole is about 6.5 billion times as massive as our sun. Slight differences between each of the four images suggest that material is zipping around the black hole at lightning speed.

“This black hole is much bigger than the orbit of Neptune, and Neptune takes 200 years to go around the sun,” says Geoffrey Crew, a research scientist at Haystack Observatory. “With the M87 black hole being so massive, an orbiting planet would go around it within a week and be traveling at close to the speed of light.”

Black holes provide the gravitational glue that holds galaxies together. Evidence indicates that super massive black holes at the center of galaxies which spin, tend to create spiral galaxies. Those which don’t spin, create star cluster galaxies. That may be horsefeathers because we really don’t know, but the speculation has some science behind it.
We are all subject to entropy. We are born, we die (repeat). I leave it to each of you to work out the eternal plan if indeed there is one. One of the benefits of the age that we live in is that we know much more about the universe around us than people could conceive of 100 years ago. I’m not just talking about the Higgs Boson, quantum foam, gravitational string theory, and Hawking radiation (a theory that explains that black holes shrink over time through release of specific radiation) that put Stephen Hawking’s pin in the map.
When a star goes through its life cycle it will return a significant amount of mass back into the interstellar medium in the form of stellar winds. For a large star with an initial mass of 10-20 times the mass of the sun, the star may return 80-90% of its mass to the interstellar medium in the form of stellar winds, or a nova or even a supernova. So while a star may start out as almost entirely hydrogen and helium when it forms, the gas that returns to the interstellar medium will be slightly enriched with metals, that is, the metallicity will go up.
This enriched gas that has been returned to the interstellar medium will go on to form a second generation of stars, which will still be almost entirely hydrogen and helium, but now with a tiny fraction more of metals. The process will repeat, and each time it does the gas will become more enriched with metals. In order to have enough metals that rocky planets such as the earth can form the gas must go through at least 20 star formation and enrichment cycles. To date, the highest metallicity ever observed in a star is about three times the metallicity of the sun.
The elegant universe where we live is a massive clock, a time machine, and we can enjoy it every cloudless night if we are in an area without light pollution. On of the best places in the US is the Arizona highlands, where I live, home to a few observatories. Anyone who looks up and is not humbled, is insufficiently educated. And that is your Sunday Sermonette. I will also make a plug for the Sky Guide App, available on phones, or mobile devices. If you aren’t in the dry air without light pollution of the Arizona highlands, you can still enjoy exploring the sky with your I-Pad.