On this day in 1776, the founders declared America’s independence from Britain.
Everybody knows this – but the fact we tend to gloss over is that the fight wasnt finished right then and there. They kept fighting for that freedom until 1783, over seven years of bloody struggle and sacrifice. In fact, we the people didn’t adopt our Constitution until 1787, more than 11 years after those 56 men gathered in a room and signed their name to a piece of parchment that said theres a better way for men and women to live: in freedom.
On July 4th, 1776, Thomas Jefferson wrote some of the greatest most powerful words in all of history: We hold these truths to be self-evident, that all men are created equal, that they are endowed by their Creator with certain unalienable Rights, that among these are Life, Liberty and the pursuit of Happiness. (h/t Glenn Beck)

Compare this philosophy to that of socialism: “Socialism, is the doctrine that man has no right to exist for his own sake, that his life and his work do not belong to him, but belong to society, that the only justification of his existence is his service to society, and that society may dispose of him in any way it pleases for the sake of whatever it deems to be its own tribal, collective good.**” (Ayn Rand)

**Obamacare mandates exactly that: the productive exist for the aid of the non-productive, and all must change their behavior to conform with what the state prescribes as the good.(PJM)

Fifth Column: The FBI is investigating more than 100 Muslim soldiers and military contractors with the potential to carry out Fort Hood-style attacks. The administration has kept a lid on the growing threat.

It’s covering up the truth about an alarmingly widespread Islamist penetration of the military. The dangerous fifth column was discovered more than two years after Army Maj. Nidal Hasan opened fire on fellow soldiers at Fort Hood, Texas, killing 13 and wounding 29. 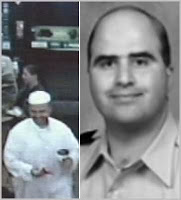 The administration whitewashed the jihadist massacre as a run-of-the-mill case of “workplace violence.” Now it’s trying to postpone Hasan’s trial until after the election to keep Islamic terrorism out of the headlines.

Details about the 100-plus investigations of other jihadist soldiers are only now coming out after being suppressed for several months. The FBI and Defense Department first revealed the numbers in a closed House-Senate committee hearing in December.

“I was surprised and struck by the numbers,” Senate Homeland Security Committee Chairman Joseph Lieberman, I-Conn., told NPR. “They were larger than I expected.” That’s quite an understatement. The numbers show we’re a long way from finishing the war on Islamic terror, as much as this administration wants to pretend we’re no longer even at war.

Since 2001, authorities have disrupted or prosecuted more than 30 plots or attacks against military targets within the U.S. (IBD)

Rep. Allen West, R-FL “This is not surprising. If you look at a Muslim Brotherhood memo found in 2004 by FBI agents at a Muslim terror suspect’s home just across the Potomac. The document laid out a plan for American Muslims to infiltrate and “destroy” the U.S. system “from within.” This is a wholehearted, stealth jihad type of attack on America, yet, outrageously, this administration is working closely together with both the Muslim Brotherhood in Egypt, its world headquarters, and its front groups inside America.” (Fox News)

You can have freedom or you can have peace, but it’s exceptionally difficult to have both at the same time.