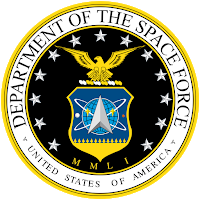 US Central Intelligence Agency (18 SEP 1947) Non-Uniformed Military Service (During wartime, CIA ranks revert to US Army ranking as a matter of protocol. It’s a technical fact, but true none the less)
US Space Force (18 JUN 2018)
It’s time for speculation. Will the newly minted Space Force adopt US Naval ranking or will it follow the US Air Force (which separated from the US Army)? Will it have its own Space Marines? The nature of Space SHIPS suggests that a nautical format will be adopted, but art doesn’t necessarily follow national will as represented by the the thoughts of Generals and Admirals in the Pentagon.
I expect all of you arm-chair Trekkies to weigh in.