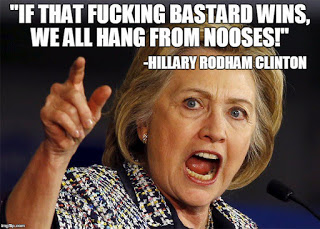 In the FBI pecking order, Assistant Director Peter Strzok was the second highest FBI agent in the Counter Intelligence Division. CNN and MSNBC are painting him as just another office flunky as he faces off with Congress this coming week.
It’s important to frame the ‘slow coup’ that Strzok and his cronies dreamed up and executed. Special Counsel and former FBI Director Mueller is still running his part of the show. It’s important to grasp the hubris of the FBI leadership as they sought to craft the outcome of an election by creating a false narrative against President Trump through their “investigation”. It’s not unlike the sort of thing that the KGB under Baria would have plotting, but lacked the skill of consumate schemers in banana republics.

Reporter, Sharyl Attkisson (herself married to a former FBI agent) wrote, “Strzok is the subject of what I see as one of the most damaging conclusions in the Department of Justice (DOJ) inspector general report: As the nation’s top FBI counterespionage official, he indicated “a willingness to take official action to impact [Donald Trump’s] electoral prospects.
“Specifically, while working on the Hillary Clinton classified email investigation in August 2016, Strzok wrote that he and unnamed others would “stop” Trump from getting elected. He shared his intentions with at least one other FBI official, attorney Lisa Page.
“Strzok isn’t just any rank-and-file guy spouting off in one ill-advised email. His fingerprints were on every FBI investigation that stood to impact Clinton’s presidential candidacy or to hurt Trump before and after the 2016 election.

“He was chief of the FBI’s Counterespionage Section and number two in the FBI’s Counterintelligence Division. He led the team of investigators in the Clinton classified email probe and led the FBI investigation into alleged Russian interference in the election. He was involved in the controversial anti-Trump “Steele dossier” used, in part, to obtain multiple secret wiretaps. He was the one who interviewed Trump adviser Lt. Gen. Michael Flynn, who pled guilty to lying to the FBI only to later learn that agents reportedly didn’t think he’d lied. And Strzok was the “top” FBI agent appointed to work on the team of special counsel Robert Mueller to investigate alleged Trump-Russia collusion. ”

“The earth-shattering finding on Strzok by the inspector general (IG) confirms a citizenry’s worst fears: A high-ranking government intel official allegedly conspired to affect the outcome of a U.S. presidential election.” 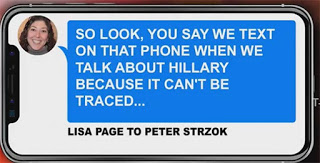 There are multiple allegations of FBI misbehavior in that inquiry, including conspiracies to frame Trump, and improper spying on Trump associates. Investigating those allegations takes on an added sense of urgency with news that the FBI’s top counterespionage official expressed willingness to use his official position against a political enemy.
This blog’s readers should consider reading the entire DOJ Inspector General’s report (HERE).
Aug. 8, 2016: 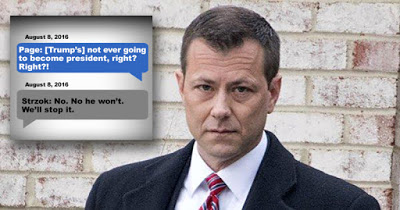 Strzok: ”No. No he won’t. We’ll stop it.”
Aug. 15, 2016:
Strzok: “I want to believe the path you threw out for consideration in Andy’s office — that there’s no way [Trump] gets elected — but I’m afraid we can’t take that risk … It’s like an insurance policy in the unlikely event you die before you’re 40.”
Late August 2016:
Reportedly working for the FBI, Professor Stefan Halper, a reputed one-time CIA operative, meets with Trump campaign co-chairman Sam Clovis, offering his services as a foreign-policy adviser, according to the Washington Post. Halper would later offer to hire Carter Page, a foreign policy adviser to the Trump campaign.
Somewhere around this time, the FBI initiates a new wiretap against ex-Trump campaign chairman Paul Manafort, according to CNN, which extends at least through early 2017.
September 2016:
Former British spy Christopher Steele, hired by private research firm Fusion GPS to investigate the Trump campaign, becomes an FBI source and uses Associate Deputy Attorney General Bruce Ohr as a point of contact. Steele tells Ohr that he’s “desperate” that Trump not get elected.
President Obama warns Russia not to interfere in the U.S. election.
Sept. 2, 2016:
FBI attorney Lisa Page texts Strzok that “[President Obama] wants to know everything we’re doing.”
Nov. 3, 2016:
Page texts Strzok: “The [New York Times] probability numbers are dropping every day. I’m scared for our organization.”
March 14, 2017:
Page texts Strzok: “Finally two pages away from finishing [“All the President’s Men”]. Did you know the president resigns in the end?!” 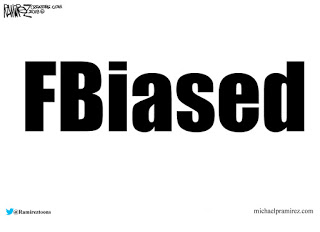 Strzok texts about “unfinished business” that he “unleashed” with the Clinton classified email probe and states: “Now I need to fix it and finish it.” He also refers to the special counsel probe, which hadn’t yet begun in earnest, as an “investigation leading to impeachment” but also states he had a “gut sense and concern there’s no big ‘there’ there.”
Strzok is still collecting a salary, courtesy of taxpayers, at the FBI Human Resources Department. If it weren’t for the IG’s investigation, requested by Congress, he’d likely still be helping lead special counsel Mueller’s investigation of Trump today.