It’s Getting Warm for Hillary

Carly Fiorina is making the talk show circuits, answering questions for Hillary Clinton (who has set herself above the press). I wonder how long this will last, but find the situation hilarious. Essentially, Fiorina is debating Clinton without Clinton (who dodges every question like the artful dodger she is) being present. 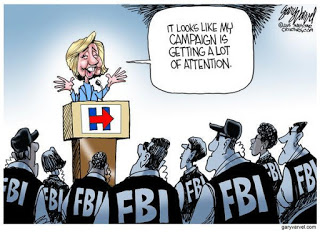 Of all possible candidates that the Bitch of Benghazi doesn’t want to meet in a national debate, I’m sure that Fiorina tops the list.

But moving on to Hillary and ah, the injustice of persecuting her for being above the law. Does anyone else see the Obama hand in this, giving it to the Clintons?

And what will happen if Hillary is indicted and must drop out of the race – just leaving a Republican woman to represent all of her gender? Will it lead to Elizabeth (Fake Indian) Warren to take up Hillary’s mantle and the “only woman in the presidential race”…?