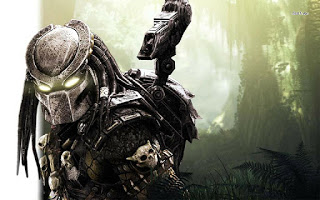 Facebook
Twitter
Pinterest
WhatsApp
I don’t know how many of this blog’s readers are fans of the Predator and Alien movies, but THE PREDATOR (Predator 4) debuts next month.

“A young boy (Jacob Tremblay) accidentally triggers an alert that brings the Predators back to Earth. The universe’s most lethal hunters have genetically upgraded themselves with DNA from other alien species and only a crew of former soldiers along with a disgruntled science teacher can stop the hunters before everybody becomes their prey.”

The Predator franchise began with the film starring Arnold Schwarzenegger (1987), written by Shane Black, based on the premise that aliens come to earth to engage in trophy hunting. The concept was melded with the Alien film franchise (Ridley Scott) to produce Alien vs Predator and Alien vs Predator Requiem and that film spun to produce the current The Predator (P-4). If it sounds a bit confusing, it is to all but the most die-hard of franchise fans.
Because I like the films, I’ll part with a few shekels to go see it. I suspect I’ll go alone since it’s too scary for the grandkids (who often go to the movies with me).

Don’t be cruel, it’s not as bad as Sharknado (popular during Shark Week).