Islamic Terrorist – A Pardon in the Works? 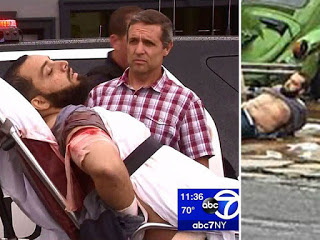 Facebook
Twitter
Pinterest
WhatsApp
Yes, of course, the bomber was a Muslim. Trump was right, Clinton was wrong – – as usual. Who else sets off pressure cooker IED’s? It’s a cottage industry. It’s what the savages do, etc. Nobody is surprised with the exception of Hillary and Barack.
Ahmad Khan Rahami, the man sought in connection with weekend bombings in New York and New Jersey, was taken into custody after a shootout with police on this morning.

(Fox News) An eyewitness to Rahami’s capture in Linden, NJ told Fox News that he saw a man walking down a street with a gun in his hand. A police car pulled up next to him and the man fired at cops 4-6 times. The shooter then began running down the street with several police cars trailing him.

Why didn’t the police kill him? Are they completely incompetent?
It’s not as though in cases of obvious terrorism that enhanced interrogation can be used. He will invoke the Fifth Amendment, get a lawyer and in a few years there will be a trial, which is his right.
OR the police could have saved the taxpayers the trouble. To me it speaks to a lack of adequate training.
A terrorist bomber opens fire on the police and they shoot to wound? These are the police, not the FBI. They should have ended him. Since the FBI are taking marching orders from Hillary these days, I don’t know how they would have handled it.
Will Barack pardon Ahmad Khan Rahami on his way out of office? Who knows? He’s been pardoning a lot of black crack dealers, he’s pushing to close the military prison at Guantanamo Bay (and wants to hand the base back to the Cuban government, an enemy of the USA). Why not pardon a terrorist that lights off one bomb and plans to detonate several others? Mosts of the terrorists/enemy combatants who Barack released from Gitmo returned to the fight. There’s a pattern here, and a precedent for Ahmad that might work in his favor since the New Jersey police spared him.