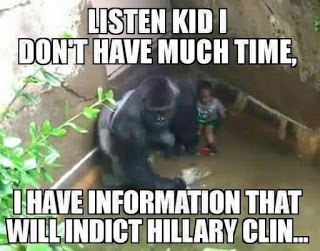 The untimely death of Harambe, the gorilla at the Cincinnati Zoo, at the hands of a sniper, has been the subject of continuing speculation. Others suggest that Harambe is still alive and that his death was a hoax. Is he vacationing in Bora Bora, or is he in gorilla heaven?
And what of the negro child who may have been privy to Harambe’s last thoughts? Where is he? Has anyone heard from him?
I’d suggest that we contact the FBI for answers, but since they shut down the X-Files and gave Hillary a pass, who can rely on what they say?
HILLARY’S SEIZURES 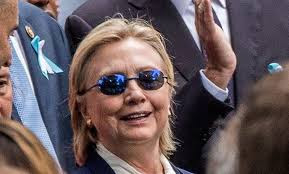 Kipling said, “Epileptic fits don’t matter in political employ,” in his famous satirical poem, “The Post that Fitted.”
Hillary Clinton is hoping that Kipling was right as she marches (spastically) toward the US Presidency, surrounded by medical handlers trying to keep her upright.

Is she using a double? The sick, old, crone (right) doesn’t look much like the Hillary photos that she uses as recruiting posters. But don’t let your lying eyes deceive you, she’s ready to be leader of the free world.
Who is the real Hillary?  It may come down to DNA testing, but would that work if she has an evil twin? (yes, I know — both twins are evil in this case)
NO EAR PIECES FOR THE DEBATE? 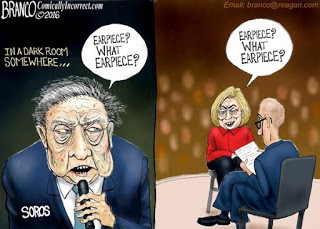 I find it disconcerting that not only will Hillary be denied an earpiece for the debate, but the news anchors who will be moderating the debate won’t be using them either. How will Hillary know what to say? How will the iconic news people (Democrats all) know what to ask by way of follow-up questions?
That’s like depriving Barack of his teleprompter.
How will the handlers deal with this crisis?