Home Blog Post NAFTA and Mex...
Facebook
Twitter
Pinterest
WhatsApp
NAFTA Negotiations
Round one of the NAFTA negations finished in August and round two began on September 1. Round two (which took place in Canada over 5 days) has ended and there will be more talks.
The media reported that the US wants to end NAFTA, but that’s not true. The US has only stated that it wishes to renegotiate for a better and fairer deal.
NAFTA, which came into force in 1994, created what is now the world’s biggest free-trade bloc. The US contends that Mexico benefited at the expense of the US. As proof, the Trump administration has pointed to the trade deficit, with Americans buying more goods and services from Mexico and Canada than vice versa. Economists (who can’t agree on anything) offer mixed and often worthless or even harmful opinions on what the trade deficit means. Conservative Americans prefer a balanced trade program.

NOTE: Illegal narcotics are not included in the trade deficit, but I contend that they should be since many/most Mexican officials are either partly or wholly owned by drug cartels – based on reports from reliable sources.

Canada wants NAFTA to include ‘rights for Indians’. I am not sure how that plays in trade, but the First Nation people in Canada are a big lobby. 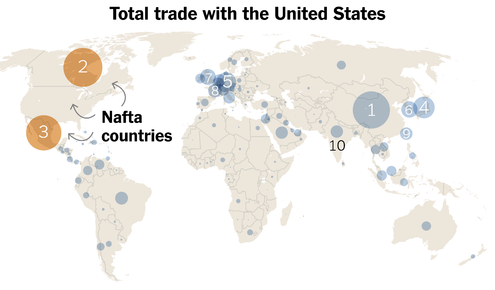 Three issues have come to the fore.

Right now, for example, a car assembled in Mexico is not subject to an import tax if a certain percentage of the vehicle was made in North America. The Trump administration wants to increase that figure, a move that is supported by the biggest automobile union in the United States. Carmakers, however, are wary, saying that such a move could raise their costs.

Under NAFTA, companies in North America can use a system of independent arbitration to force a country to do away with measures that violate the trade deal. The system has been used mostly by Canadian and Mexican companies against the United States, and the White House wants to overhaul it.

One area in which the countries seem to agree is the need to modernize NAFTA, which predates the ubiquitousness of the internet. While the sides’ positions differ, updates could address e-commerce and newer workplace and environmental rules.

Mexico is scheduled to hold presidential elections next July. And a new deal may be tough to sell to the country’s politicians as they gear up for the campaign.
Partido Acción Nacional, PAN, is a center/right party and they don’t have a prayer of winning.
Partido Revolucionario Institucional, PRI, is a left-leaning party, which has dominated Mexican politics for the past year and currently controls the Chamber of Deputies and the Presidency.
Partido de la Revolución Democrática, PRD is a leftist party which did surprisingly well in the last election and may do well in the one upcoming.
Movimiento de Regeneración Nacional, MORENA, is not communist in name, but if you read what they write, you’d think that they are. If the election was held today, MORENA would win. That says a lot for where Mexico is headed. MORENA began in 2014 and has a lot of support among the masses. The labor unions are shifting support from PRI to MORENA and that means a lot more in Mexico than it does in the US.

MORENA is likely to make a very big deal about any failure by PRI to get a good deal in the NAFTA renegotiation. This puts added pressure on the powers that be in Mexico.

Based on sources of my own, most of the government leadership is anticipating that they will be forced to leave office after the next election.

The peso is in bad shape, the Mexican economy is limping along, drug cartel violence is unrestrained, corruption is endemic, and the Mexican people feel that the US is demeaning them.