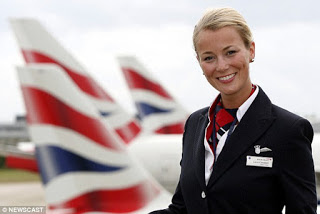 I feel so neglected, so overlooked, so dismissed, so — empty. Who knew that the stewardesses who served in the British Airways first and business class cabin also served in other ways (h/t Stormy).  I only fly in the good cabins (first class or upper class) and not one, “coffee, tea or me” question, with a wink or something.
No invitation to tea and crumpets and a happier landing.
I’m definitely not cool enough. – OR – Were they actually spies working for MI-6 who feared my mojo? Now that is a question isn’t it?
When you fly Aeroflot, the flight attendants are mostly models and there’s an assumption that they work for Mother Russia and whisper in Putin’s ear (red sparrows).
So British Airways, thanks for NOTHING!