Is obama an economic witch doctor? 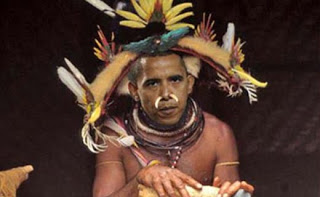 According to ABC News (part of the mainstream media that very reluctantly reports anything negative toward the obama regime), the economic recovery is set to fade as government supports dry up. Maybe that’s why Speaker Pelosi wants to borrow $26 billion just now to pay for state government jobs in states favorable to the obama regime who are bankrupt. It will keep the unemployment rate under 10% through mid-term elections.

Will the American people ever stop asking the government to bribe them with their own tax money? There is only scant evidence that the average voter understands the tactics of the socialist left.
Meanwhile, the president continues in campaign mode, raising money, telling the American people that all is well and happy days are here again. (throw a little more smoke powder on the fire, barack) His plan to change and rearrange American society will take many years and many more borrowed trillions before you’ll see prosperity. The words of a witch doctor or the president? Smoke and mirrors or solid economic sense?

What happened to the obama stimulus?

The Federal Reserve board members may have a gloomier outlook for the US economy this summer than they did in the spring. The released minutes from the last meeting of the FOMC members on June 22 -23 show that expectations for both economic growth and price inflation have been revised downward for the remainder of this year and 2011.

Americans need to think carefully about their choices for elected office in November. The Democrats boast that they’ve done a great deal. All I can see in the way of action on their part is a great deal of spending with nothing to show for it and a great deal of rhetoric.