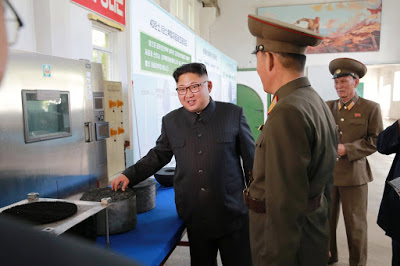 Facebook
Twitter
Pinterest
WhatsApp
North Korea – Chemical Weapons in Syria
(WSJ) A leaked UN report of the UN Panel of Experts on the Democratic People’s Republic of Korea (DPRK) relates that North Korea sent equipment to Syria that could be used to make chemical weapons. Some 40 previously unreported shipments were made between 2012 and 2017, the report found.
The report said North Korean missile specialists had been seen at Syrian weapon-making centers.

Syria has been a North Korean weapons client for half a century. Older hands will recall that North Korea built the Syrian Scud missile complexes and sold Syria a turn-key scud assembly plant in the 1960s and 1970s, when Hafez al Assad was Syrian President.
The North Koreans assisted Syria in developing chemical warheads for missiles and artillery. Syria became a test bed for and an extension of North Korea’s own weapons of mass destruction programs.
When Syria gave up its chemical weapons in 2013, the North Korean connection was always a fallback, if necessary. It is important to note that the North Korean chemical weapons assistance program in Syria involved substances far more lethal than chlorine. Much of the material catalogued by the UN has civilian and military applications. The entire North Korean economy is set up on a dual-use basis because of it small size.
One of the eight writers of the UN report said that the UN experts knew the North Koreans were helping the Syrians and now have supported their suspicions with copies of contracts, shipping documents and other documentation and testimony about the cooperation.
Did the US leak the UN report to ratchet up pressure on North Korea? What do you think?

It makes sense to make each warhead a “smart”, independently guided re-entry vehicle. Putin claims that each drone is also nuclear powered, which would make them quite large, because of need for the fuel to propel them. Sort of a space shuttle that can maneuver on the way down to the target, very fast, but also very maneuverable? Maybe not as maneuverable as Vlad says because one still must obey the laws of physics no matter how cool you are.
We need to snag one of those bad boys and see if they really work, and how they work. Sort of like when Viktor Belenko stole that MiG-25 and landed it in Japan.
A new Cold War with new Cold War toys may be in the offing. Does this mean that the Democrats (like Bernie Sanders who had his honeymoon in Moscow) will go back to loving the Russians?