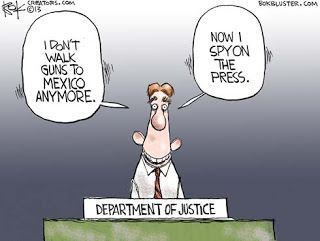 Congress shall make no law respecting an establishment of religion, or prohibiting the free exercise thereof; or abridging the freedom of speech, or of the press; or the right of the people peaceably to assemble, and to petition the Government for a redress of grievances. (First Amendment to the US Constitution)

In the past, when the US Department of Justice wanted information from a news gathering organization, they went to the press, and told them what they were hunting for. Both sides ended up in court and a judged decided on the scope allowed for the probe. The press does understand that there is a need for balance in these things and that the First Amendment doesn’t authorize them to go “hog wild”.
Today, that process is completely circumvented and the press is concerned about its ability to report the news. Former Obama press secretary Robert Gibbs says that Team Obama needs to explain what they’re doing.
Team Obama will engage in their typical behavior, circling the wagons, obfuscation, denial, deflection, casting blame and telling everyone, “we don’t know”.
In my opinion (for what it’s worth), the Patriot Act wasn’t necessary. It provided a short cut for solid investigation. There wasn’t anything in the Patriot Act that couldn’t be accomplished through pre-Patriot Act investigations. It simply allowed people to do things without the sort of oversight that they had in the past. That’s not usually a good thing.
If you want to find a leak, it’s not all that difficult. Trust me. If you want to work with the press instead of against the press, they are usually quite reasonable. I’ve personally spoken with a lot of very good reporters and Mike Wallace did a story where I appeared that was featured on CBS Sixty Minutes. CBS reporter Sharyl Attkisson, who I’ve personally spoken with, is one of the best in the business today. There are goof-balls like Chris Matthews that give journalism a bad name, but most of the people in the business are not like that.
Finding the truth:

(News Busters) SHARYL ATTKISSON: I think one of the things that working in Washington has aggravated me when trying to get to the truth. This is true across administrations, whether they’re Democrats or Republicans. They seem to have lost sight of the fact that they work for us, not the other way around. And I think we the public are owed a lot of information, collected and gathered on our behalf, such as information floating around about Benghazi. And it’s guarded by the holders and the keepers of the information, as if they somehow own it and hold the privilege over you that you can’t see it.

For example, Freedom of Information requests that I’ve made. That act has now been used, instead of to facilitate the release of public information, which was its intention – it’s now in my opinion been used to withhold and delay the release of public information. I get pretty much zero response. That didn’t start under the Obama administration. He seems to have perfected it, he and the federal agencies. But this was true also under George Bush. It’s very difficult to get public information, even when you apply the Freedom of Information law.
…
ATTKISSON: Who made the decision not to convene the Counter-terrorism Security group the night of the Benghazi attacks, which we understand is protocol under presidential directive in SPD-46. Why was the protocol not followed? I’ve gotten a partial answer to that from the White House before they quit talking to me altogether. They said they felt it wasn’t needed, that all the proper advisors on counter-terrorism were in the mix.

Attkisson (CBS News) as a target

“I can confirm that an intrusion of my computers has been under some investigation on my end for some months but I’m not prepared to make an allegation against a specific entity today as I’ve been patient and methodical about this matter,” Attkisson told POLITICO on Tuesday. “I need to check with my attorney and CBS to get their recommendations on info we make public.”

It’s difficult to find the truth and hold government accountable if the press is not in the mix.

President Obama should be happy with the IRS Scandal, the AP Scandal and the way that the Benghazi Scandal has unfolded. They’ve completely distracted the nation from Fast and Furious, the ObamaCare train wreck, prematurely giving a lawyer to the Boston Marathon Bomber and his support for post birth abortions.