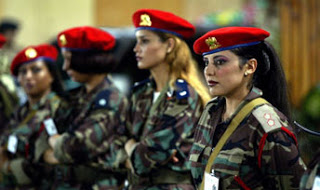 Let’s trace the problem with Libya from the revolution that ousted Muammar Gaddafi (infamous, now dead, Libyan dictator – pictured left). The United States wanted to support the Libyan freedom fighters who wanted Gaddafi gone because truth be told, not many people (anywhere) liked him. As with all dictators-for-life, you eventually out live your welcome.
Hillary Clinton, eager to make her diplomatic mark on Libya and the Arab Spring, began to wage her own war under the aegis of the US State Department in the hopes of overthrowing the regime. Hillary wanted to be the President of the United States more than just about anything else. And in fact, she still does. She’d be the first female American President — and she always thought that she deserved the job more than her husband, Bill.
Clinton decided to go it alone in her efforts to undermine the Gaddafi regime because the Central Intelligence Agency didn’t seem happy about the prospect of empowering or arming al Qaeda, who the President said was finished and Secretary Clinton dismissed.
Clearly Hillary, the wanna-be POTUS didn’t want to put the message out that she was going to supply Stinger surface-to-air missiles to al Qaeda, so it was TOP SECRET. Both CIA and AFRICOM washed their hands of the State Department gambit to the extent possible.
Fast forward — the war is over, Obama and Hillary take credit for a victory and claim that Libya is now on the side of the angels. Bad Policy and Weak Politicians…

(Atlas Shrugged – Geller) According to the diplomats, what these whistleblowers will say will be at least as explosive as what we have already learned about the scandal, including details about what really transpired in Benghazi that are potentially devastating to both Barack Obama and Hillary Clinton.

Secretary of State Clinton sent Ambassador Chris Stevens to an under-armed, virtually unprotected consulate in Benghazi on a TOP SECRET mission to buy the Stinger MANPADS back from al Qaeda. As Ambassador, Stevens was Clinton’s man in Libya. To be fair, he spoke the language and was as familiar with Libyan culture as any USGOV employee then in Libya. He was not personally equipped to deal with al Qaeda. — Hillary: What does it matter? Hillary Clinton still wanted to proceed because, in part, as one of the diplomats said, she wanted “to overthrow Gaddafi on the cheap.”
If General Ham (AFRICOM) became involved and sent in the military to support Stevens, it would draw attention to his secret negotiations to un-do the State Department’s monumental ARMS to AL QAEDA blunder. CIA Director/General Petraeus had a detailed knowledge of the State Department moves and felt that they were irresponsible, but chose to remain with the game. After the al Qaeda attack on the US State and CIA facilities in Benghazi, Secretary Clinton chose to have him removed through disclosing the scandal that we are familiar with — a species of palace coup. Petraeus, no longer posed a threat to Secretary Clinton.

(PJ Media) Regarding General Ham, military contacts of the diplomats tell them that AFRICOM had Special Ops “assets in place that could have come to the aid of the Benghazi consulate immediately (not in six hours).”

Ham was told by the White House not to send the aid to the trapped men, but Ham decided to disobey and did so anyway, whereupon the White House “called his deputy and had the deputy threaten to relieve Ham of his command.” If the military responded to the attack in Benghazi, Secretary Clinton’s “ARMS to AL QAEDA” program would have been disclosed to the public and the chance of her election to the “leader of the free world” slot would have been made much more difficult.
The two CIA protective officers (Wood and Dougherty) who responded to help Ambassador Stevens, and were killed, did so in direct violation of orders. It’s possible that they weren’t aware WHY Secretary Clinton didn’t want to send aid.
Secretary Hillary Clinton had to come up with a reason why the US Consulate came under attack. The only thing that they managed to cobble together is the now completely discredited “Islamic video” that nobody saw. Yes, it was an absolute lie. In Clinton’s scheming mind, a necessary lie to cover the truth that would torpedo her political future. What if the al Qaeda terrorists used one of the missiles provided to them by Hillary Clinton’s State Department to down an American passenger aircraft?
(Virtual Mirage) What about Barack Obama? He’s in his second term, planning his presidential monument/library. Benghazi had become a Hillary Clinton project.  When reporters such as Sharyl Attkisson (CBS) or James Rosen (Fox News) started digging too deeply, the Justice Department was turned loose to hack their computers and target their telephones as “co-conspirators to leaks” because whistle blowers began to come forward and share what they knew about Benghazi. Let’s face it, the ARMS TO AL QAEDA – Clinton nexus was classified TOP SECRET. Any leaks would be subject to prosecution to the fullest extent of the law.