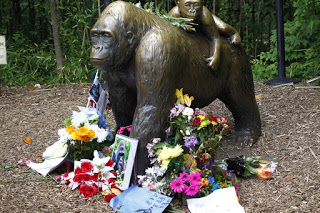 The Harambe story continues to excite, three months after he was killed, as he prepared to eat a small black child who visited him at the Cincinnati Zoo.
The memes keep coming and Zoo officials don’t know what to do. Clearly the “Harambe Family” at the zoo continues to heal after they put a 170 grain bullet through his head at close range. 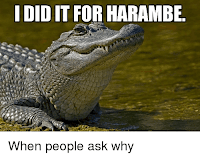 Some of the memes are completely tasteless. In this one (left), the alligator who ate the child at Disney in Orlando recently, offers an excuse.
The family of the boy who survived continues to receive death threats from guerrilla lovers in South America who can’t tell the difference between a gorilla and a guerrilla. I have seen the memes mixed up and Harambe shirts with CHE LIVES blazed across the front.
The more serious memes suggest that if Harambe had been a white gorilla, he wouldn’t have been shot. The Cincinnati Zoo, taking this to heart, is planning to paint the gorillas white to keep them safe in the future. Zoo officials contend that Harambe’s carcass was not fed to minority welfare recipients at a downtown Cincinnati soup kitchen. They explain that his pelt and bones went to a taxidermist and his stuffed effigy will be on display at the entrance to the new Gorilla exhibit featuring rare white gorillas. (the zoo did not account for his tender, succulent flesh)
Weiner vs Wiener 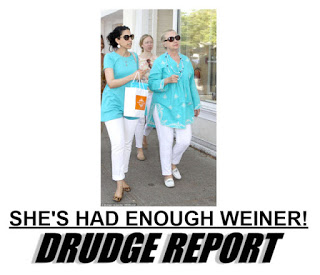 Whether his true name is Carlos Danger or Anthony Weiner, the story keeps rolling as the husband of Hillary Clinton’s personal aide, Huma Weiner texts photos of his penis to women other than Huma or Hillary. (More Here)
Huma Weiner plans to divorce her husband, Anthony. It opens the door for Hillary Clinton and Huma to marry after former president Bill Clinton dies tragically after Hillary wins the national election to become president. Will Hillary make an “honest woman” of her long time lover, Huma? Will Huma Clinton become First Lady? Only time will tell.
One thing is sure. Huma has had enough weiner and is moving on to something else. If you thought that the memes about Harambe were good, you haven’t seen anything yet!