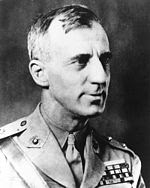 Facebook
Twitter
Pinterest
WhatsApp
We all have heroes in our lives — people who we look up to. Some of those people are friends or acquaintances and still others are legends.

Smedley Darlington Butler (July 30, 1881 – June 21, 1940) is a hero of mine. Against the wishes of his father, he left high school 38 days before his seventeenth birthday to enlist in the Marine Corps during the Spanish–American War. He received a direct commission in the Marine Corps and rose to the rank of Major General. At the time, it was the highest rank in the Marine Corps. He won two Medals of Honor and the Brevet Medal (the Medal of Honor awarded to officers). At the time of his death, with three Medals of Honor, he was the most highly decorated service member in the history of the United States.
In 1935, Butler wrote a book titled War Is a Racket, where he described and criticized the workings of the United States in its foreign actions and wars, such as those he took part in. There is much more to his story and I encourage you to read about it.