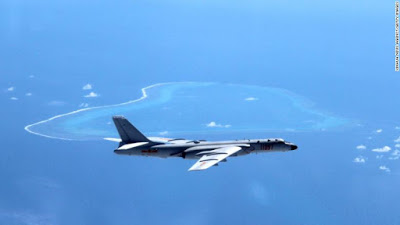 Facebook
Twitter
Pinterest
WhatsApp
Adventures in Norkland
North Korea apparently continues the preparations for dismantling the nuclear test site at Punggye-ri. The Daily NK reported its sources said that the government has ordered a crash effort to repair and improve the railroad tracks between Wonsan and the tests site.

North Korea intends to transport foreign journalists by rail because other modes of transportation are poor or do not exist. The rail lines are neglected but are repairable.
On 19 May, a North Korean military officer and a civilian defected to South Korea. They were spotted in waters north of Baengnyeong Island” near the inter-Korean border, a source told Yonhap news agency. The source said, “They expressed willingness to defect.”
Baengnyeongdo is one of several islands off North Korea’s southwest coast but south of the seaward extension of the Military Demarcation Line. That extension is called the Northern Limit Line. South Korean forces garrison the islands.
If the defections are genuine, their timing is awkward for North-South relations. North Korea could use the incident to cause further strain with South Korea.
Military defections are infrequent. The last was the December 2017 defection by an enlisted soldier at Panmunjom. Officer defections are rare. The last was in 2008. South Korean news sources reported that since 2000 14 North Korean officers have defected. Nevertheless, genuine defectors can provide timely insights about popular attitudes towards Kim Jong Un and his diplomatic outreach. Defector sources reported that North Koreans are not aware of a potential summit with the US.

If the defectors are North Korean agents, then the intelligence business has not been curtailed as part of the peace offensive.

On 19 May, North Korea demanded that South Korea transfer to North Korea 12 waitresses who defected from a North Korean state-run restaurant in Ningbo in northeastern China in 2016. The North Korean Red Cross issued a statement that said, “The South Korean authorities should … send our women citizens to their families without delay and thus show the will to improve North-South ties.”
North Korea claims the women were kidnapped by South Korean intelligence agents. South Korea claims that the women defected on their own and want to remain in South Korea.
This new demand looks like the North is going out of its way to be provocative, trying to see how far it can push South Korea to get concessions. That signals that a change in attitude has occurred in the leadership. North Korean leaders appear to have reverted to their comfortable, historic position of hustling the South Koreans. The charm offensive seems to have been replaced by the extortion offensive, rather quickly. Resurrecting old issues and compelling new talks on them to gain more concessions is vintage North Korean practice. The image of a more refined, calmer, conciliatory North Korea is beginning to look like a thin veneer.
Taken as a whole, it would seem that North Korea is of two minds. Something is wrong in Pyongyang. (more wrong than usual) It would be interesting if Kim Jong Un defected to the US during the summit in Singapore. I’m not suggesting that it would happen. Only that it would be interesting. Maybe he’d defect to China and not the US? How would THAT play?
China
Chinese strategic bombers made their first landings in the Paracels. According to a statement released by the Ministry of National Defense on 18 May, “A division of the People’s Liberation Army Air Force (PLAAF) recently organized multiple bombers, such as the H-6K, to conduct take-off and landing training on islands and reefs in the South China Sea in order to improve our ability to ‘reach all territory, conduct strikes at any time and strike in all directions.”

“It said the pilot of the H-6K bomber conducted assault training on a designated sea target and then carried out take-offs and landings at an airport in the area, describing the exercise as preparation for “the West Pacific and the battle for the South China Sea”. (CNN carried a report on their website as well. Not a bad report. Though their video media section only carried negative stories about President Trump and Stormy Daniels)
The Chinese statement did not identify the island used by the bombers. However, multiple news agencies determined that the island was Woody Island in the Paracel Islands. Woody Island is the administrative center for Xisha District and contains the Chinese military headquarters for the South China Sea.
The H-6K has a combat radius of 3,500 kms/2,200 miles. It is a cruise missile carrier as well as a bomber. From Woody Island, Chinese H-6K bombers can patrol the entire South China Sea area claimed by China. In the Spratly Islands, the three runways China built on man-made islands can accommodate fighter aircraft, but not the bombers.
Strategic bomber deployments to Woody Island are another enhancement to Chinese capabilities to enforce its claim to the area within the nine-dash line, on the map.
India-Jammu and Kashmir State
Ramadan is here again. If I was in my old house, there would be parties and loud music every night when the sun went down and the Mohammedans feasted in homes all around me. Now that my house is in Mohammedan hands, I’m sure that they’ll be splashing poolside. On the Subcontinent, India declared a Ramadan ceasefire, and Pakistan fired across the border.

On 16 May, Indian announced it would halt operations against militants in Jammu and Kashmir State during Ramadan. It is the first Ramadan ceasefire in 18 years.
In India, including Jammu and Kashmir State, Ramadan began on 17 May. Not all groups welcomed the Indian ceasefire pledge. The Pakistan-based Lashkar-e-Taiba terrorist group said that honoring the ceasefire would be a sin. It said it intended to continue its attacks.
Border exchanges of fire continue. On 18 May, Pakistani and Indian border forces exchanged first near Sialkot in Pakistan, just hours announced it would cease operations during Ramadan. The cross-border firing and shelling began overnight and spread to dozens of posts in the Jammu region of the Himalayan territory, said Indian police officer S.D. Singh. The exchanges of fire killed eight civilians and one Indian soldier.
Syria

In the past two days, news sources have reported two large explosions at different locations. On the 18th, large explosions occurred near the airport at Hama. The Syrian Observatory for Human Rights reported 11 people died and that the explosion was caused by a technical problem.
On the 21st an explosion occurred at a military base that is used by Iranians, south of Damascus.
Syrian sources said the earlier explosion was caused by farmers who set fire to their fields and lost control of it. News sources speculated both were Israeli attacks.