White Powder and the Afghan Economy 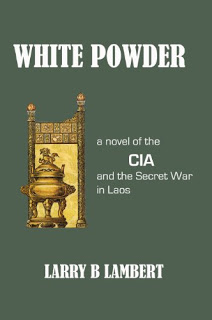 Facebook
Twitter
Pinterest
WhatsApp
Opium and the politics of opium has dominated Afghanistan for a very long time. It’s also the principal cash crop of the Kurds (American allies in Syria and Iraq). Therefore, while we wage a war on opiates at home in the US, we support the production of opium in the Middle East and the Asian Subcontinent by not destroying the crops – many of which are produced by our allies.

It’s not a new story. And it may be time to shamelessly plug my book, “White Powder: A Novel of the CIA and the Secret War in Laos”.

The vast bulk of heroin that hits the street in the USA today comes from Latin America (it must be somewhere around 95%+). Much of it is grown in Guatemala, Honduras and Southern Mexico. So while Afghan/Thai/Myanmar/Kurdish/Laotian heroin is a problem, it’s more of a problem to Asia than it is to the US. The Mexicans control distribution (by in large) in the US.

Afghanistan produced a record opium poppy harvest in 2017. On 21 May, the UN Office on Drugs and Crime (UNODC) released its latest report on opium poppy production in Afghanistan. It also produced a shorter summary of key points in the report. Virtual Mirage (your favorite blog) reproduced excerpts from the UNODC report’s executive summary and analytical comments from the UNODC’s separate summary of the report for your consumption.

UNODC Report opening paragraphs. “In 2017, opium poppy cultivation increased sharply to an unprecedented record high of 328,000 hectares from an estimated 201,000 hectares in 2016. Between 2016 and 2017, the area under cultivation with opium poppy increased by 127,000 hectares – the increase alone exceeded the levels of annual cultivation of 2009 and 2010.”
“Opium poppy cultivation increased strongly in almost all major poppy cultivating provinces. In Helmand province alone, cultivation increased by 63,700 hectares (+79 per cent) which accounted for about half of the total national increase between 2016 and 2017. Strong increases were observed also in Balkh (+10,000 hectares or almost five times more than in 2016), Kandahar (+7,500 hectares or +37 per cent), Nimroz (+6,200 hectares or +116 per cent), and Uruzgan (+6,000 hectares or +39 per cent).”
UNODC analysis: Potential heroin production is unprecedented. “Last year’s record levels of production led to unprecedented levels of potential heroin production. From the 2017 opium harvest, some 550-900 tons of heroin of export quality (purity between 50 and 70 per cent) can be produced.
UNODC Report excerpt. “The record high opium production in Afghanistan led to a rapid expansion of the illegal opiate economy in 2017. Being worth between US$ 4.1 to 6.6 billion in 2017, it was of considerable size when compared to Afghanistan’s overall economy, namely between 20 and 32 per cent of GDP. The opiate economy had about the size of the entire agricultural sector of the country and exceeded by far the value of Afghanistan’s licit exports of goods and services in 2016 (estimated at 7 per cent of GDP).”
UNODC analysis: The illegal economy rapidly expanded. With a value of up to 32 per cent of Afghanistan’s GDP, opium poppy is a lucrative cash crop. It has become a crucial component of the Afghan economy that secures the livelihoods of many Afghans who engage in cultivation, work on poppy fields or partake in the illicit drug trade.

Jobs for the Poor

Opium poppy cultivation is labor intensive. In 2017 it provided up to 354,000 full time jobs just for weeding and tending the fields.
UNODC Report excerpt. “The income earned at the farm-gate supported the wider, licit rural economy. Afghan farmers purchase food, have medical expenses, and purchase daily needs products. These expenses – paid from opium money – benefited local bakers, butchers and other small-scale businesses in rural Afghanistan. Opiates have thus created an illegal economy that has permeated the rural society to the extent that many communities – not only farmers – have become dependent on the income from opium poppy to sustain their livelihoods.
Comment: The illegal rural economy supports the legal rural economy.
UNODC analysis: It is grown throughout the country. In the Western and Northern regions, farmers cultivated poppy in more than a third of the villages; in the Eastern region in more than 50 per cent and in the Southern region in almost 85 per cent of villages.
In addition to farming households, opium provides access to daily wage labor to a large number of local and migrant workers hired by farmers. In 2017, opium poppy weeding and harvesting provided the equivalent of up to 354,000 full time jobs to rural areas. Wages from poppy cultivation support all the essential services of village life, including bakers, butchers, local clinics and small businesses.
The Afghan Ministry of Counter-Narcotics (MCN)/UNODC estimated that in 2017, insurgency groups, including the Taliban, accrued a minimum of US$ 116 – 184 million from taxing the opiate production in Afghanistan.
Comment: The quarterly report by the Special Inspector General for Afghanistan’s Reconstruction that was published last month judged that the security situation worsened somewhat, compared to conditions a year ago.
The UNODC report adds another perspective. The extent of poppy cultivation has evolved into a critical component of village life. All essential services in the village are financed by the wages from poppy cultivation. In this system, destroying poppy crops is the same as destroying general village livelihood. The ripple effects from eradication reach the entire village, including any security people who receive bribes to augment their salaries.
Poppy culture has evolved into an important measure of Taliban influence. It was not always the case because the Taliban banned poppy cultivation when Mullah Omar ruled in Kabul. When driven from power, the Taliban came to rely on it to finance their uprising.
Poppy cultivation information puts new light on discussions of the area of government or Taliban control. When an area is controlled or influenced by the Taliban that seems to mean that poppy cultivation flourishes openly. In areas influenced by the government, that seems to mean poppy cultivation is largely ignored.
With opium poppy cultivation contributing up to one third of GDP, involving a minimum of a third of the villages plus providing a third of a million wage-paying jobs, this crop is ineradicable without further impoverishing Afghanistan. The Taliban are not just fighting for a different government. They are fighting for the livelihood of more than half of the farm villages in Afghanistan.