In the News, Your Humpday Blues

Chairman Kim is going to Russia … to meet President Putin. Russian officials told a South Korean diplomatic delegation visiting Moscow this week that plans were being made for a summit but offered no details on a time or place.

Russian Foreign Minister Lavrov met Kim Jong Un for the first time in May 2018 in Pyongyang. Lavrov conveyed President Putin’s invitation to meet in Moscow and Kim accepted. Putin’s scheduled trip to Beijing makes it convenient to double up on his summitry, by meeting Kim en route.
Some analysts have warned about a North Korean strategy of triangulation that plays the Russia, China and the US against each other for North Korea’s advantage in negotiations. China is the key driver in North Korean foreign relations.
That warning is exaggerated because Russia has so few assets to offer North Korea without compensation and North Korea lacks the means to pay. California has a larger GDP than Russia and more to offer for socialist construction.

Russia is a spoiler. Its meddling is mostly to annoy the US and to profit from potential US investment and economic aid to North Korea. That’s about the only card left for them to play and they wish to remain valid in a world that tends to ignore them (certainly not the Congressional Democrats, though).
Kim is acting out his vision of himself as a world stateman. Russians have cooperated in violating the UN sanctions and earned Kim’s gratitude and probably invitations to participate in future joint ventures.
Russia will exert no pressure on Kim to agree to denuclearize with the US. Putin is more likely to encourage Kim to drive a harder bargain with the US. 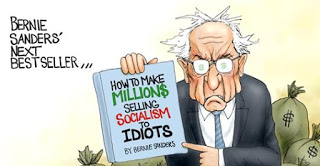 Crazy Bernie Sanders, the old communist, wants to be President, Commander-in-Chief, and leader of the free world.

He’s quite the curmudgeon and I’m sure that while he’d interject a lot of humor over however long he’s in the White House before he seizes up and dies and leaves Vice President Spartacus or Pok-a-haunt-us to run the place, he may not be the best choice. But if not Bernie, which one of the now three dozen contenders? Look what happened to Hillary.

Will Crazy Bernie survive the campaign trail to ascend and make a few more million $$?