I’ll pick Afghanistan but the narrative would be almost the same if I was writing about Mexico today. Substitute drug cartels for the Taliban and you’re in Guadalajara or Culiacán.  Then again it could also be Aleppo. Which makes a great case for the wall, but I digress.
A surge in attacks in Kabul and in Baghlan Province. In Kabul on 1 March, near-simultaneous Taliban suicide bombings and an hours-long shootout with Afghan security forces left at least 16 people dead and over 100 wounded.
In one of the twin attacks, a suicide car bomber rammed his vehicle into the gates of a police compound in western Kabul. The explosion was followed by a gun fight between security forces and several gunmen who stormed into the complex.

The second attack took place in eastern Kabul where a suicide bomber on foot detonated his explosives outside the offices of the national intelligence service, killing one person. A total of 104 people were wounded in both attacks, an Afghan official said.
In a message to the media, Taliban spokesman Zabihullah Mujahid claimed responsibility for both attacks.
In Baghlan Province, northwest of Kabul, a Taliban fighting group took control of Tala Wa Barfak District Administrative Center after three days of fighting. A provincial security official said the security forces left their checkpoints and withdrew from the entire district, which is now in Taliban hands. Mujahid, the Taliban spokesman, tweeted that their fighters overran the Tala Wa Barfak District headquarters.
The attacks confirm that last year’s targeting strategy is unchanged. In Kabul, the suicide bombers attacked government security agencies. The attack in Baghlan showed that the Taliban continue to want to overrun district centers. This is the second district in Baghlan to be overrun since last summer.
Those Lovable Norks
The North Korean Propaganda machine needs a new writer if they are to be taken seriously. Another year begets another round of Allied exercises and another North Korean rant. The timing of the Allied exercises is propitious for North Korea’s threat of counter-action because March is the month that North Korea’s winter training cycle reaches its climax in large formation training.
Enjoy the read:

“A spokesman for the General Staff of the Korean People’s Army (KPA) issued the following statement on Thursday, 2 March, as the US imperialists and the south Korean puppet warmongers kicked off joint military exercises for aggression against the DPRK (Democratic People’s Republic of Korea) on Wednesday, 1 March.

“The largest-ever war drills will reportedly be staged by unprecedentedly huge aggressor forces including the US imperialist forces present in south Korea, reinforced US forces from overseas, south Korean puppet troops and forces of various vassal states.”

“To be involved in this muscle-flexing are various type of strategic assets such as striking groups of US nuclear carriers Ronald Reagan and Carl Vinson, nuclear submarines, nuclear strategic bombers, stealth fighters and Aegis destroyers. In view of the prevailing grave situation, the General Staff of the KPA clarifies the following principled stand of the revolutionary armed forces of the DPRK:”

“1. Now that the US imperialists and the south Korean puppet forces again kicked off the dangerous nuclear war drills against the DPRK at its doorstep, our army will counter them with the toughest counteractions, as it had already declared. This stand of ours, clarified before the world, is by no means an empty talk.”

“2. Should the U.S. imperialists and the south Korean puppet forces fire even a single shell into the waters where the sovereignty of our Republic is exercised, the KPA will immediately launch its merciless military counter-actions. They should not forget that our revolutionary armed forces have everything in place and are always on alert.”

“3. The forces of vassal countries will be targets of our strikes as they are imprudently involved in the on-going saber-rattling, toeing the U.S. imperialists’ hostile policy towards the DPRK. They have to bear in mind that those lackeys have always met a miserable fate for recklessly running wild, backed by their master. The KPA will mercilessly foil the nuclear war racket of the aggressors with its treasured nuclear sword of justice.”

The North’s training might be showier this year, punctuated by missile tests. However, the likelihood of action that risks general war is low. The worst time for North Korea to start a war is when the Allies are reinforced and training for one. Last year’s exercises were described as the largest ever, involving some 300,000 US and South Korean military personnel. Defense Secretary Mattis said this year’s training will be comparable in size to last year’s. The threat of retaliation for stray shell fire is identical to last year.
Allied exercise Foal Eagle began on 1 March and Key Resolve will began on 13 March. They will continue through April. Ulchi Focus Lens kicks off in the summer. 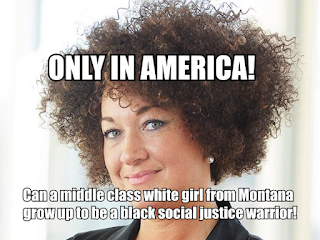 Nkechi Amare Diallo (the African formerly known as Rachel Dolezal) is officially West African now that she’s changed her name. Virtual Mirage congratulates Nkechi in her new identity. It worked for The Artist Formerly Known as Prince until his unfortunate overdose. Whereas Prince was a decent man by all accounts, Nkechi is known as a bitch.
Nkechi Amere Diallo has shown the world that you can be an authentic negro even after being born and raised white. I would have liked to have had her considered to be head of the Democratic National Committee, but it’s a racist and xenophobic world, so the Donkey Party didn’t do the right thing in her case… she should convert to Islam if she really wants to close the deal