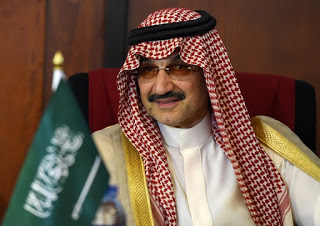 Facebook
Twitter
Pinterest
WhatsApp
Context and Precedence
Saudi Arabia is an executive monarchy without a written Constitution or independent government institutions like a Parliament or courts, so accusations of corruption are difficult to evaluate. The boundaries between the public funds and the wealth of the royal family are murky at best, and corruption, as other countries would describe it, is believed to be widespread.
Wally’s Demise
King Salman has been shaking things up in Saudi Arabia, and he has positioned his son, Crown Prince Mohammed to control the military. Expect those moves to continue. The recent arrests of prominent Saudis are interesting but none so interesting as Al-Waleed bin Talal bin Abdulaziz al Saud (age 62). Waleed, who we’ll call “Wally” here on this blog, has a long pedigree in Saudi Arabia and he has extensive financial holdings in the US.
Wally set himself against President Trump, characterizing the president as “a disgrace”. President Trump, who has known Wally for a long time, counter-punched as is his nature.
Wally’s arrest in Saudi Arabia four days ago was a surprise to the financial community and the catamites who attend him. It did not surprise me, because the arrest did two things. (1) It endeared King Salman to President Trump even more; (2) Wally is a flaming homosexual and in a part of the world that doesn’t think that’s appropriate, his membership in the Royal Family has been a source of personal disgrace to the current and previous kings. They finally figured out how best to serve their and America’s best interests. In past years, Wally would have been shielded by USGOV. He has bought a lot of politicians –HOWEVER– As an open and vocal critic of President Trump, that shield vanished – sorry Prince Wally.
I’m sure that Prince Wally’s catamites, who have reportedly dropped off him like remoras swimming away from a dead shark, will find other new friends to service in Hollywood.
Joe Biden Weeps
Wally (a personal friend of Barack Obama) is/was also THE principal money behind former Vice President Joe (Slow Joe) Biden’s steam roller campaign to replace President Trump. Joe will have to go back to dragging the sack the old fashioned way to build up a war chest.
Expect to see Old Joe to be making the rubber chicken circuit more frequently now, appealing to transgenders and “diverse people” to join him in his Long March to the White House.
The old white man is positioning himself as the champion of the diverse, the freaks and misfits who thought that Bernie Sanders (another old white man) might be a good champion of the ’cause-based’ voters who are attracted by identity politics.