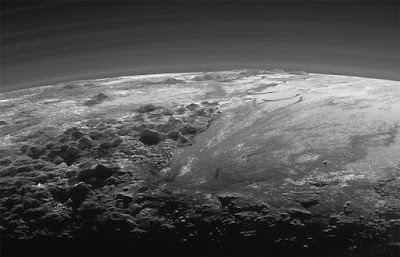 Facebook
Twitter
Pinterest
WhatsApp
2014 MU69 or Bust! The New Horizons Mission has passed Pluto and it’s headed for a close encounter with 2014 MU89, a comet-like object in the Kuiper Belt about the size of Rhode Island in three years. But today all eyes are on Pluto (again) as the New Horizons spacecraft keeps sending photos from its fly-by of Pluto.

CAPE CANAVERAL, Fla. (Reuters) – Scientists have discovered what appear to be ice-spewing volcanoes on the surface of Pluto, raising questions about how the tiny, distant world has been so geologically active, according to research presented on Monday.

Rather than spewing molten rock, volcanoes on Pluto release frozen (and possibly even liquid) water, and other ices such as nitrogen, ammonia or methane.
White (NASA researcher) admits the idea of volcanoes on Pluto, which is about 30 times farther away from the sun than Earth, sounds crazy, “but it’s the least crazy thing we can thing of” to explain the mountains.
New Horizons also found several deep fractures in Pluto’s surface, the largest of which spans more than 200 miles (322 km)in length. The top of the fracture is about 2.5 miles (4 km)higher than the base – more than twice as high as walls of the Grand Canyon.
“The fact that there are so many large faults in this part of Pluto indicates that the crust has experienced a major extension at some point in its history,” White said.
Scientists suspect the decay of naturally occurring radioactive elements in Pluto’s core was the heat source for its transformation.
There were many nay-sayers who thought that Pluto was simply a rock in space and there was considerable push-back to the New Horizons mission. Those people are eating their words. Pluto is one of the more interesting planets in the Solar System.