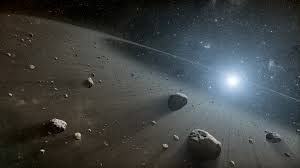 The asteroid belt stretched completely around the distant blue-white star. Stellar wars between the mother star and its neighbors resulted in gravitational fluxes that destroyed the planet. The rubble made a perfect mine. The really valuable metal always came from the planet’s interior, so a broken planet provided much more access than trying to mine an intact orb.
Drifting in the midst of the asteroids, the mining vessel Huscarl’s huge jaws drew them in whole and crushed them into powder that the factory ship sorted and processed. Inside the ship, the noise and vibration of the operation provided a prehistorically loud background that took a lot of getting used to. Fortunately or unfortunately for the crew of the Huscarl, all of them had been marooned after a fashion, in deep space, in a low-g environment. As miners, none of them had never known a life that didn’t include impossible noise, synthetic food processors and grinding monotony. The Corporation owned Huscarl and took the bulk of the profit from machine and the efforts of the crew. Law provided for shares of the profit to be divided among the captain and crew of all mining ships. That safety net notwithstanding, the profit proved insufficient to allow the crew to leave the ship.

Suddenly, the jaws that crushed, the trundles the spun and the lasers that scanned and sorted minerals based on their composition slowed and stopped. The Huscarl’s low thrust ion propulsion also came to a stop.

The large maw on the front of the ship slowly closed, gripping the material within its massive intake closely so that not even a mote of dust could escape.

Cora Carlson, captain and master of the Huscarl awoke from a deep sleep, wondering if she died and had passed on to the next existence, whatever form that may take.

Disappointed, she felt all too alive, her insipid headache all to real. The weathered woman pulled herself from her cocoon and launched herself at the hatch that secured her cabin. Huscarl’s crew quarters and command spaces were almost microscopic when compared to the bulk of the huge mining ship. The ship’s command center lay adjacent to her small quarters and when she emerged, Rock, the ship’s chief engineer, stood over the controls.

“Captain,” he nodded his acknowledgement, “we are showing automatic shut-down, all life management functions are intact and operational.”

“Damage to the ship?”

“None, Captain. We have an anomaly inside of the processor four module that triggered the shut-down.”

“What sort of anomaly?”

“I’ve never seen anything like this before ma’am. The sensor shows that we’ve sucked in a Xenomorph, whatever that is. Maybe some sort of fossil that the company has on its historical retention list.”

Captain Carlson took a moment to reflect, “If it’s not valuable, the company wouldn’t want to retain it, and certainly wouldn’t trigger a shut-down. That means shares for all of us.”

Rock seldom smiled, but the idea of additional shares (rare on a mining ship) caused him to show his teeth, and what might pass for a species of smile, arrived at by activating muscles seldom used. “We need to send somebody down into the processor four module and retrieve it or the ship won’t restart.”

Carlson said, “Send Aboud. If it’s dangerous better that we lose him than vital crew.”

“He’s dumber than a crowbar, Captain. Maybe we should…”

“What if it explodes, some sort of warhead from a long dead civilization? I won’t risk anyone but Aboud and tell him to take that ridiculous towel off his head before he puts on his EVA suit.”

In the shadowy depths of processor number four, Aboud, wearing a well-worn EVA suit uses a crowbar to search through rocky rubble. Some of the rock is vitreous, golden-hued. Amber.


“You seeing this, captain?” Aboud asked and then turned his helmet cam toward some other more normal rocks.


“Yes, turn your helmet back toward the amber. There is is, do you see it? Mostly buried in rubble.”


What little Captain Carlson could see, amidst the amber, looks a bit like a dark, coiled tail.


Aboud reached down and poked at it, lifting it to reveal a piece of flexible conduit. Peering up at the overhead, Aboud gave voice to his opinion, “This ship is falling apart.”


I’m not interested in your opinions, Aboud, keep on looking. It has to be there somewhere. Aboud searched on, finally dropping his crowbar to pick up a large piece of Amber. He hoisted it up for a better view and he could’t tell for sure but it looked to him and to both Carlson and Rock, viewing remotely from the bridge, that something is suspended within the amber.

An automatic laser scanner activated and wiped its light over Aboud.

Rock looked at the Captain, the scanner confirms the presence of a xenomorph. He turned to his control panner and sent a message to the Corporation.

He pulled a well worn book with grease-stained pages and looked for the right reference. Not finding it, he simply resorted to the detection criteria.

Detailing scans of a xenomorph specimen detected and recovered within an organic resin-polymer that resembles amber, with little or no fossilization. Share claim hereby submitted according to section 34 of the ship’s articles.

Carlson turned to Rock and said, “We’re back in business. Start her back up Mr. Rock and lets get down and see what Aboud rescued from the abyss.” As they moved aft through corridors, the great machinery pounded back to life.

As they arrived in the airlock room, with scores of space suits hanging in racks on the walls, Carlson and Rock saw through the natural backlighting that the compartment provided, that a creature that looked much like a massive human hand with four joints for each finger. A tube extended from what would be the palm and a long curled tail stretched from where a a person’s arm would be.

“Isn’t this interesting. The Corporation shut down the ship’s operation for this shit? I hope the share value is worth it,” Carlson said.

“Maybe we should crack it open and see,” Aboud said speculatively.

“Nobody is doing anything to this bug until the Corporation takes it off our hands. I don’t want to lose share money just to satisfy your curiosity. Store it in the hold.” She turned and left the compartment, trailed by Rock who sealed the hatch behind him.

Aboud re-wrapped his turban, hefted his crowbar and said, “What would it hurt if I did?”

The ship continued to process ore and as we fade out from that scene in the air lock compartment, back into the asteroid field and deep space beyond, we see a logo on the side of the Huscarl. Weyland-Yutani Corp. Building better worlds.

Note to readers: If you have never seen
any of films in the Alien or the Promethius
franchises, this story won’t make that much
sense to you.