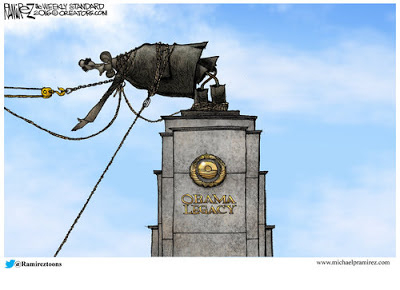 Facebook
Twitter
Pinterest
WhatsApp
George W. Bush and family don’t deserve the credit/blame for dismantling Barack’s legacy. To be fair, they weren’t invited to the party.

Jeb! tried to crash the party, but he left before the booze started to flow and returned to his home in Florida where he remains a malevolent hector, downing martinis at the country club, lamenting his loss to all who will lend an ear.
The Bush family are in large part responsible for the presidency of Barack…which is their legacy as well. And they can take a victory lap for the presidency of Donald Trump because in the end they didn’t have any more credibility with the voters than Barack did.
“Legacy candidates” Jeb! and Hillary, who felt that the nation owed them the presidency will go down in the history books as a dim corner, soon forgotten. Though Michelle Obama may be remembered by historians as one of the ugliest and least gracious of first ladies in modern time. I guess it’s something to make the history books if only as a footnote.