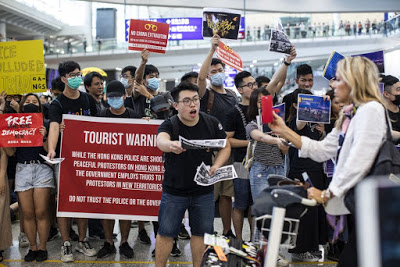 “The government will be resolute in maintaining law and order of Hong Kong and restoring confidence.”

This was a weekend of non-stop protests. After work on Friday, 2 August, government civil servants joined the protests, calling for investigations of the regulations restricting political activity by civil servants.
On Saturday and Sunday, protestors blocked subway tunnels and roadways and disrupted traffic in the city
On the night of the 4th, the government warned, that the demonstrations “have already gone far beyond the limits of peaceful and rational protests for which the government and general public will not condone under any circumstances.”
The early reports indicate the general strike is a partial success. The protestors continue to escalate the amount of damage and disruption their demonstrations cause. They have now exceeded the patience of the Chinese government and stand to lose everything. 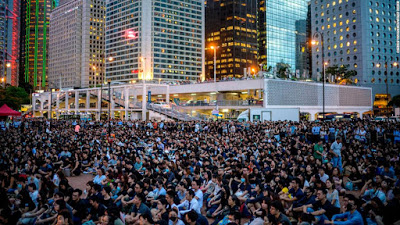 There have been at least three separate sets of reports about Chinese preparations for a military/paramilitary intervention in Hong Kong. Two about preparations by forces outside Hong Kong and one set about the Hong Kong garrison. China is prepared to use military force in Hong Kong.
The trigger would be a request by the Lam administration. What would trigger Lam to make that request is less clear. Identification of the protests as a challenge to Chinese sovereignty would seem to be enough.
If the People’s Liberation Army and paramilitary units intervene, they will impose martial law and suspend most of the freedoms the Hong Kongers now enjoy. China will sacrifice Hong Kong before it makes concessions to street protestors.