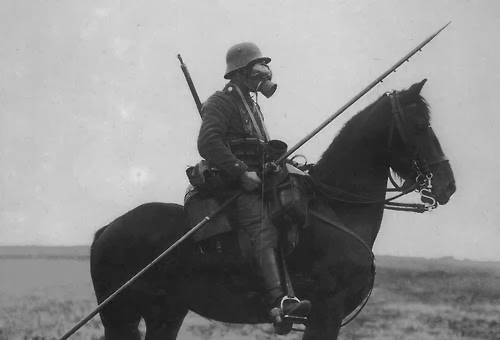 This is a photo of a German soldier riding a horse, carrying a lance and wearing a gas mask in 1917 on the Western Front. If the irony doesn’t grab you nothing will.

General Billy Mitchell predicted the Japanese attack on Pearl Harbor circa 1926, and stressed the need for air power. They ran him out of the service. However on December 8, 1941, he was declared a ‘genius’.

It reminds me of my boss berating me in front of others for being on the Internet back in about 1992, telling me what BS it all was and that I needed to have my head examined—after I told him that it would change the world. “The reasonable man adapts himself to the world; the unreasonable one persists in trying to adapt the world to himself. Therefore, all progress depends on the unreasonable man.” – G. B. Shaw
We learn from history that mankind is not capable of learning anything from history.