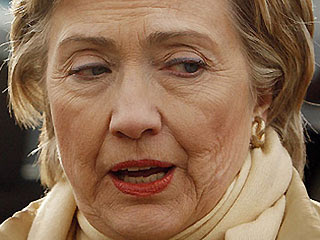 Facebook
Twitter
Pinterest
WhatsApp
Suggestions for Hillary
(1) Hillary – Hillary – Hillary, if you want to be President of the United States and Leader of the Free World, the last thing that you should do is to link yourself to Barack Hussein Obama. Obama is the court jester of the entire planet – and his sidekick Joe (Slow Joe) Biden has to be kept on trips to places that nobody ever heard of or he runs his mouth and it’s even worse than Barack when he’s rambling off-teleprompter. Vladimir Putin and the Russians made him look even more the fool than he’s been in the past. A trained chimp could do a better job than Obama has done. The key is not to tinker with things. The POTUS is nearly a fire-and-forget job. If Obama had just golfed away his 8 years, he would have gone out as a successful president.
(2) ObamaCare is a looser, you need to work for its repeal. Start again when you’re madam president and don’t take any cues from Nancy (Nasty) Pelosi. Better if you get buy-in from others than merely those in your party so if it crashes, you can spread the blame. That’s the basis of all politics.
(3) Hire Putin’s speechwriters. Or if they won’t jump ship, hire Rand Paul. ANYONE who is better in touch with the American people and the world in general than the Yale/Harvard crowd of twenty-somethings that congregate on your staff. The world doesn’t end at the Hudson River and the Washington Beltway.
(4) An ugly man can be president. An ugly woman can be first lady. But an ugly woman won’t be elected president. You’re a bit long in the tooth and all of that high living shows. You don’t have a picture in the back room that takes on the visage of the worn out, dilapidated, liberal hag that you’ve become. You need to go to a fat farm, have your body liposucked, your teeth capped like Biden’s, maybe a hair transplant, have your skin stretched and loose the stupid glasses. Maybe a bit of facial reconstruction as well. You want to look like Cheryl Ladd who is about your age. If you don’t look like “you” anymore – that’s the whole point.
(5) Whatever Obama says or does, you do the exact and precise opposite — and you’ll be fine. Eliminate most federal firearms laws, disband the Federal Bureau of Alcohol, Tobacco, Firearms and Explosives, and let the states deal with guns. If they want them, fine. If they don’t, fine. Fly-over country will forgive you for your past indiscretions.
(6) The best way for the federal government to grow the US Economy is to get out of the business of tinkering with the economy. Allow free enterprise to be free and they’ll make money and pay taxes that you can use to buy a limited amount of votes — but you can’t tax them to buy an unlimited amount of votes. That strategy only has a limited shelf life and Barack used it up.
(7) You’ll always be known as the Bitch of Benghazi. That can’t be fixed. You could try apologizing for the families of the fallen for screwing the pooch in Libya. People forgive. Use some bullshit excuse like “it was classified” – BLAME BARACK.
(8) Do not under any circumstances appoint Anthony Weiner to any job in your administration. I understand that he may remind you of Bill — but resist the urge.
(9) You may be a dyed-in-the-wool lesbian and your progressive friends may think that’s just too cool, but the average American voter may not be ready for that (Read more Here). Ginnifer Flowers discussion with the Daily Mail about how Bill Clinton told her that, “Hillary ate more pussy than he (Bill) had” makes perfect sense. Huma Weiner may be your ‘body woman’ and your girl toy, but if it comes out with any degree of credibility in the national election, it will make Benghazi look like a Sunday picnic. Look what the liberal press did to Huma’s husband, Anthony (see Step 8 above).
————- 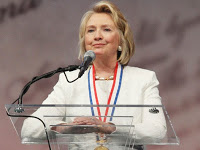 Oh, and congratulations on receiving the Liberty Medal on the anniversary of the Benghazi Massacre, presented by none other than Jeb Bush — who would also like to be president.

The Washington Times apparently didn’t feel that you deserved the honor for “restoring America’s position in the world”.

(Times) It is a laughable claim that Clinton “restore(d) America’s role in the world,” after considering the treatment America has received from Russia, Syria, and the rest of the international community in recent weeks. This newly seen defiance from old allies and foes alike definetely indicates that she did not “strengthen its (America’s) global leadership.”

As for Hillary, looking long in the tooth at the podium, face caked with make-up in a futile attempt to hide the high life for too many years and the jacket draped to disguise the pot belly — she needs to take my 9 step advice…