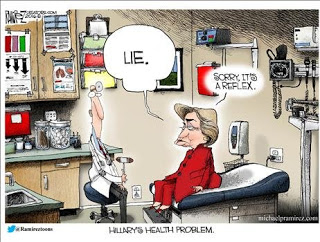 The elements which were emplaced to save the republic from corruption, namely the FBI (and in a larger sense, the Executive Branch of Government) have failed us all. There is no government standard of integrity that can be called on to vet Hillary Clinton, a liar and perjurer – though those can be said to be some of her more benign traits.

Here is one more analysis of what is likely a chronic health issue that would preclude Clinton from ANY sensitive job in government.
(H/T Daily Timewaster)
Dr. Noel cites a PATTERN of personal health ‘crisis events’ that Clinton has experienced in public. It’s a lot like the Bill Cosby pattern of behavior in that the problem was common knowledge – but was not discussed.
Will a chronic neurological disease that impacts judgment and the capability to hold public office be disclosed?
Don’t expect the mainstream media to engage in journalism. That ship sailed a long time ago.