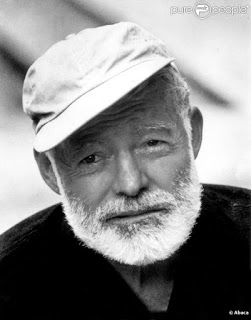 Ernest Hemmingway made the Caribbean lifestyle more intriguing partly because of fiction, based closely around his own life. Since I’m knocking around in the tropics, my mind turned to the man and his work and I’m sharing those thoughts with you all.

Islands in the Stream was published shortly after his suicide in Ketchum, Idaho in an attempt to rehabilitate his reputation as an iconic writer. He’d written the book ten years earlier. The book is an exercise in self-examination of an author’s pain and misery, as he probes to try to explain what is genuine and true.

The first chapter in the book, “Bimini”, begins with an introduction to the character of Thomas Hudson, a classically stoic Hemingwayesque stoic male figure. Hudson is a renowned American painter who finds tranquility on the island of Bimini, in the Bahamas, a far cry from his usual adventurous lifestyle. Hudson’s strict routine of work is interrupted when his three sons from his two wrecked marriages; they fish; their love leaves him open to his loneliness, and then the death of two of them leaves him nothing but lonely.
Chapter two, “Cuba,” takes place soon thereafter during the Second World War in Havana, where we are introduced to an older and more distant Hudson who has just received news of his oldest (and last) son’s death in the war.
Hudson becomes more introverted and cynical, spending most of his days on the island drinking heavily and doing naval reconnaissance for the US military aboard Hudson’s yacht, converted to an auxiliary patrol boat. The US Government outfitted Hemingway’s own boat, Pilar, with radio equipment so that he could contact the Navy if he sited German submarines prowling in the Caribbean.
“At Sea”, the final act, follows Hudson and a team of irregulars aboard their boat as they track and pursue survivors of a sunken German submarine along the northern coast of Cuba. Hudson becomes intent on finding the fleeing Germans after he finds they massacred an entire village to cover their escape. The novel ends with a shoot-out and the destruction of the Germans wherein Hudson is  mortally wounded in the gun battle. During the chase, Hudson stops questioning the death of his children as he presumably prepares to join them in the great beyond.

Hemingway avoided multiculturalism, and maybe that is why he appeals to me.  Modern critics have characterized Hemingway’s work as homophobic. He’s also painted with an anti-semitic brush because of his character, Cohn, in The Sun Also Rises. A Jewish reviewer explains it this way, “Hemingway never lets the reader forget that Cohn is a Jew, not an unattractive character who happens to be a Jew but a character who is unattractive because he is a Jew. Hemingway didn’t have a politically correct bone in his body. These days it’s rare to read books written within the past decade or two that don’t follow the Hollywood doctrine of strict political correctness. I’m not going to go off on a rant, but it’s self-evident. There are a few writers such as Jim Curtis, but there aren’t many.

Earnest Hemingway isn’t even close to being my favorite author, but at times, as I age, I find myself yearning for the epoch that has passed, leaving in its wake a repudiation of chivalry, heterosexual romance, and adventurism, all of which are tarred in the name of political correctness.

Hemingway, the Byronic hero, was flawed. He burned through marriages and relationships, he drank way too much and lived through bouts of horrible depression, but the flaws helped him connect with the human condition in a way that only the best of authors do.

Orson Wells reflects on the Ernest Hemingway that he knew, who referred to Wells as, “Some damned faggot that owns an art theater.”