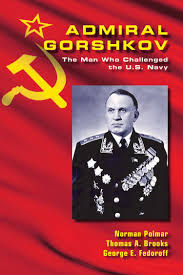 The Naval Institute Press published a book this year (2019), Admiral Gorshkov: The Man who Challenged the US Navy, by Norman Polmar, Thomas A Brokkis and George Fedoroff.
Sergey Gorshkov joined the navy at the age of seventeen, in defiance of his family and rose to be a junior surface warfare officer, commanding, ships, squadrons and then fleets.
He was clever (or lucky) enough to survive Stalin’s purges and possibly their thinning of the ranks gave him the ladder that he needed to ascend to a position where he made critical decisions for the Soviet Navy.  He’s fairly considered to be the father of the Soviet Navy, and one can only opine how he would feel were he alive to see the surface fleet rot.
No reading and understanding of the Cold War can be truly complete without a perception of the man who developed the Soviet Navy from 1956-1983. How many Russian Admirals were on the cover of Time magazine (back when the publication amounted to something)? Right, just Gorshkov. Such is the shadow that this man cast. 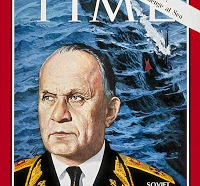 Finding a book that would do him justice is not easy, but Polmar, Brooks and Fedoroff pulled it off.
The Americans who faced Gorshkov’s fleet during the Cold War understood that they were up against a visionary man, and a master strategist.
The book takes advantage of hindsight offered by history, declassified US intelligence analysis and various publications to weave a tapestry of Admiral Gorshkov’s life, and contributions. Sure, he was the enemy, but you can always respect a worthy adversary.