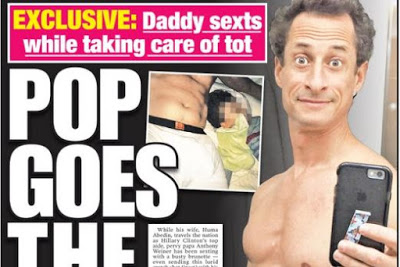 Disgraced former congressman Anthony Weiner told FoxNews.com Wednesday he knows he has a problem after his never-ending sexting scandal reached a new low with revelations he sent X-rated messages to a 15-year-old girl.
Weiner’s alleged sexting with the then-high school sophomore, who was not identified, began in January and lasted several months.

Screenshots provided by the girl clearly show Weiner’s Twitter handle responding to direct messages. At one point she notes she goes to high school and Weiner asks “Where do you go to school?” Messages on the Kik app – where Weiner allegedly used the alias “T Dog” – and on Facebook show Weiner’s face and often picture the former congressman shirtless.

Police investigated Weiner in 2011 after it emerged he was messaging a high school junior in Delaware, FoxNews.com reported. A Weiner spokesperson said the interactions with the 17-year-old girl “were neither explicit nor indecent.” Anyone under the age of 18 in Delaware is considered a minor, however, Weiner was not charged with a crime at the time.
In one picture allegedly sent to the 15-year-old girl by Weiner, he’s shown sitting outside with his shirt pulled up and his 4-year-old son sleeping on his stomach. The picture was eerily similar to a sext published by The New York Post in August showing the boy lying in bed with a scantily-clad Weiner.

Calls from Virtual Mirage (this news blog) to Huma Weiner, wife of the former congressman and aid to presidential hopeful, Hillary Clinton, were not responded to, though messages were left. “She had a chance to respond but she didn’t,” LL, editor-in-chief of the blog reported. “We are withholding judgment out of respect to her boss, Hillary Clinton, who was rumored to have had a(nother) seizure when the news broke.

“Other bloggers have suggested that if Huma paid as much (sexual) attention to her husband as she does to the Democratic choice, he might not be sexting teenage girls. Virtual Mirage stops short of that sort of mud slinging. It’s inappropriate,” LL stressed stridently. “It would be like reporting on Bill (Slick Willy) Clinton, husband of candidate Clinton, dipping his cigars into White House Intern Monica Lewinsky, in the Oval Office while he was supposed to be conducting the nation’s business instead of monkey business.  Journalists need to know where to draw the line.”
Calls to Anthony Weiner about the possibility of him running for New York City Mayor to challenge the unpopular, law enforcement hating, Socialist Bill DiBlasio were not answered either.