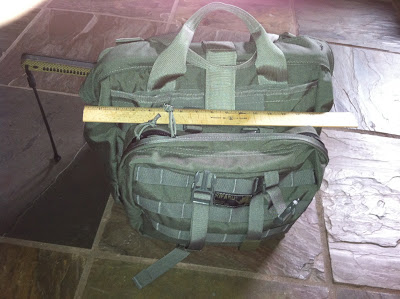 Facebook
Twitter
Pinterest
WhatsApp
What do you keep in your briefcase?
I use a Kifaru bag (above) with an attached trauma bag. Kifaru (based in Colorado) makes durable, quality equipment and I’m proud to tout their products. Everything that they make is designed to last. I first became acquainted with their products when I did extreme ‘sports’ with the US Gov.
I’m not going to outline the entire contents of my go-bag, but for the sake of discussion, I will share the non-kinetic equipment. It goes with me almost everywhere, so if you meet me, you can rest assured that  I’ll have stuff close at hand – because it’s better to have and not need than to need and not have.
The load-out varies from country to country based on local regulations but this is the baseline stuff.
I’m old fashioned. If it’s worked for 2,000 years or more, it is likely to work today. Axes are legal everywhere in the world and you never know when you will need an axe. My choice is the Eagle Talon by RJM Forge. In medieval Europe, they were war hammers, the Vikings called them “short axes” and carried them with great effect, and the American Indians found them useful. The RJM Forge products are simply the best available and they’re carried by the US Military’s SPECOPS people in the harshest environments on earth. They are very useful as climbing tools or ice axes, as pry tools or to chop wood. I’ve used this tool in extreme environments since RJM first produced it. The blade holds an edge suitable for shaving.
In the 1990’s the US Navy selected the titanium Multi Purpose Knife (MPK) as its knife of choice for the SEAL Teams after exhaustive testing. I participated in that testing and came to know Rick Schultz, the guy who made the MPK. He since sold Mission Knives and the successor company came out with the Multi Purpose Tactical (knife) or MPT, pictured above. I have an original MPK, and the MPT has a couple of features that I like even better, so that’s what I carry. My personal knife is slightly modified from the version available on the civilian market. It’s constructed of titanium, and once very sharp — stays razor sharp with very little attention to the blade. Titanium doesn’t oxidize (rust) under any circumstances and it’s non-magnetic.
Medical Gear – I might need it for myself or I might need it for you.
I focus on trauma gear because most normal wounds can be stabilized without fancy equipment.
2 x Halo Seals (for sucking chest wounds. One for the entrance and one for the exit.)
2 x Celox (controls bleeding in moderate to severe situations where direct pressure isn’t working)
1 x Tourniquet (industrial grade) for when Celox isn’t working.
4 x Five Hour Energy (because sometimes you need to stay awake). I prefer the grape flavor.
Prescription meds – because I’m a mess and need pills to keep everything normal. (I’m aging)
Misc Gear – Adaptable components
50 ft. 550 Cord
Chem Lights (green, red, IR) because marking things for yourself and others is often useful.
Surefire flashlight
Spare Sunglasses
Black Watch Cap
Gloves
Pocket Knife (along the same general lines of the MPT above but you can carry it in your pocket)
Spare Batteries
Spot Messenger (because sometimes you need to send an SOS, or to just let friends know that you’re OK.)
Energy Bars
Mini-Extreme Water Purification System w/collapsable cup
Small metal mirror
Pop-flares (military aviator issue)
Scissors (industrial grade)
Pens/paper (because it is a briefcase) Sometimes there is a Kindle in there too to keep me entertained.
I didn’t list a cell phone/satphone because it wouldn’t usually be in the Go-Bag. The same is true of a few other small misc. pieces of travel gear that I keep separate. I simply inventoried the bag this morning and that’s what’s in it.
Fully loaded the bag weighs – a lot. It’s not intended as a backpack. It’s just a briefcase that I can throw onto the seat next to me in a car and buckle it in as a passenger, or take with me on a trip. Naturally if I fly commercially, the sharps go into my checked luggage. Kinetics vary from country to country. It’s not “survival gear”. It’s “getting by gear”. There is a difference. It’s what I keep in my briefcase.