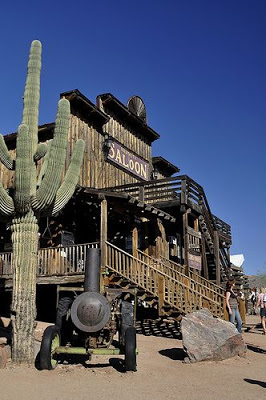 There are many scattered across the “Old West”. A lot of gold was pulled from Goldfield, Nevada. It is the county seat of Esmeralda County, Nevada. It is a census-designated place, with a resident population of 268 at the 2010 census, down from 440 in 2000. Goldfield is located between Las Vegas and Carson City, along U.S. Route 95.
Indian Springs, NV is on the way if you’re driving north from Las Vegas on Hwy 95. It’s home to Creech Air Force Base, home to the US Air Force combat drone program. They won’t let you on base to look around unless you have credentials. BUT since they moved in, there are a lot more Air Force guys and gals, many with decent off-road rigs, exploring up in the Goldfield area. It’s bee good for the Esmerelda County economy.