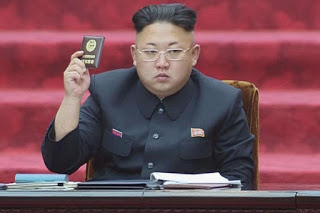 Facebook
Twitter
Pinterest
WhatsApp
Chilling relations between China and North Korea are becoming more evident. It’s North Korea’s game at this point and they can choose how it ends.

“… the situation is still inflammable.”

“For as the sanctions imposed by the United Nations begin to bite deeper, the possibility that the Democratic People’s Republic of Korea might become reckless out of desperation has never been higher….”

“Judging from their recent words and deeds, policymakers in Pyongyang have seriously misread the UN sanctions, which are aimed at its nuclear/missile provocations, not its system or leadership. They have unfairly misrepresented Beijing’s role in the process, disregarding its preoccupation with peace, humanitarian concerns and non-interference in the DPRK’s domestic affairs. And they have greatly underestimated the international community’s－not just any individual stakeholder’s political will to denuclearize the peninsula.”

“They need to reassess the situation so they do not make any misjudgments.”

“Likewise, Washington should continue to exercise restraint and pursue a peaceful resolution to the issue.”

“There have already been enough shows of force and confrontation, it is time for Pyongyang and Washington to take a step back from their previous rhetoric and instead heed the voices of reason calling for peaceful denuclearization of the peninsula.”

The editorial praised the President Trump for using “impressive patience” after announcing the end of “strategic patience.” It also praised him for agreeing with “peace-minded China.” It said tension has eased, but the situation is still dangerous. (Don’t expect the corrupt, lying, smug, elite mainstream media in the USA to report the praise.)
The editorial restated themes from an earlier Chinese commentary that the North Korean policymakers are misreading their situation and that they have overestimated their strength and underestimated their peril.
The message is that UN sanctions and Chinese enforcement actions are not directed at overthrowing the North Korean government and system. They are designed to persuade North Korea to halt specific programs that China opposes.
Kim Jong Un personally identifies with the missile and nuclear programs. Chinese advice and wisdom probably are unwelcome and, thus far, unheeded. At the same time the Chinese are exerting more pressure during this confrontation – including sanctions enforcement and use of blunter, more critical language — than in any past crisis.
Brief Summary

You can make of this what you will. This blog does not tell you how to think or what to think, but simply provides the information with a little analysis that may or may not be correct. I don’t think that anyone can tell you how this will end. Doing that would require that we crawl into the muddy, mushy minds of the power elite who rule North Korea and into the mind of the fat, near-sighted Dear Leader, bad haircut and all.
China likely has spies close to the throne. Their reaction tells us things that we may not have direct knowledge of. All that is disturbing.
China has repeated to the US that North Korea is their problem and that they will deal with it. President Trump said that North Korea is China’s problem and that they should deal with it. China is praising President Trump for impressive patience and agreeing with China.
Things are coming to a head with the Norks.