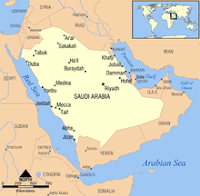 Facebook
Twitter
Pinterest
WhatsApp
There is always a lot going on in Saudi Arabia. It’s an oil rich nation, it’s the center of the Muslim World, and there are a number of political factions, most notably, the Wahhabists, who are absolute enemies of the US (and anyone who reads this blog). One of this blog’s readers has asked me to comment more about goings on in the Magic Kingdom. I picked one item of recent note. I’ll ad more about comings and goings including the ongoing struggle with Qatar in future blog posts.
In a televised address from Saudi Arabia on 4 November, Lebanese Prime Minister Saad al-Hariri announced his resignation from the office he has held since December 2016. He said that he resigned because he feared he would be assassinated, as his father Rafik al-Hariri was in 2005. He blamed Iran and its proxy, Hizballah.

“I point frankly and without evasion to Iran, which sows sedition, destruction, and havoc everywhere it goes, as proven by its meddling in the domestic affairs of the Arab nation: in Lebanon, Syria, Iraq, Bahrain, and Yemen.”
“It is driven to do so by a deep-rooted grudge against the Arab nation and a wild desire to destroy and control it. Unfortunately, it found among our sons someone to cooperate with it, to openly announce their allegiance to it, and to attempt to abduct Lebanon from its Arab and international environment, with all the values and ideals it represents; by that I mean Hizballah, the Iranian arm, not only in Lebanon, but also in the Arab world.”

President Aoun demurred. The president of Lebanon said he would not accept the resignation of Prime Minister Saad al-Hariri until he returned from Saudi Arabia, palace sources said on 5 November.
This announcement from Saudi Arabia is unprecedented. It appears to reinforce Hariri’s fear of assassination and suggests that an attempt on his life was imminent.
The resignation has generated a flood of commentaries and assessments. Those that are pro-Sunni Arab support Hariri’s accusations.

The resignation is a part of a blocking move in the struggle between the Saudis and the Iranians. The Saudis backed Hariri, but during his tenure, Hizballah’s influence and strength increased. Several commentators said the Saudis are looking for a stronger Sunni advocate in Beirut who can deny the Iranians access to the Mediterranean Sea via Lebanon.
Lebanon is in danger of becoming another political battle ground in the struggle between the Arabs and the Iranians. It is another ripple effect from the outcome of the Syrian civil war that leaves the Assad government in control in Damascus, with the help of the Iranians and Hizballah.
The Saudis (who openly fund al Qaeda) are a bulwark against Iran, now that USGOV destroyed Iraq and in effect, handed it to the Iranians/Shiites. (it’s more complicated than that, but not much more)
I put a plan forward to wipe out ISIS leadership a few years ago, but USGOV rejected it as “immoral”. Deciding what is and what is not ‘immoral’ in the Middle East is an exercise in frustration.  The Saudis, our allies, treat women worse than most of us treat our dogs. I try not to make value judgments, but that one is obvious. There have been some cracks in the veneer and Saudi women can now operate automobiles. It’s a great leap forward. They still dress in black tents.