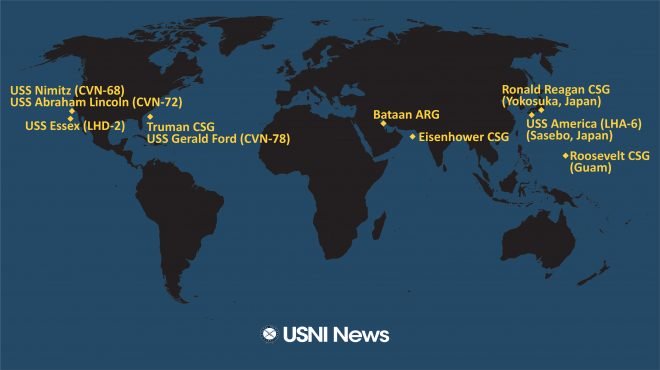 (USNI News) USS Ronald Reagan (CVN-76) has completed sea trials after its annual repair period and ahead of its spring patrol in the Western Pacific. Reagan is expected to begin its Western Pacific patrol soon.

When I look at the map, and understand that submarines and minor combatants are not included, I still say to myself, “we need more ships.” (USS Gerald Ford Carrier Program) And the big question often comes down to whether or not we need super aircraft carriers, which are very useful but they’re also tempting targets. They need to be close enough to the action to launch and recover aircraft that sortie out against the enemy.

What do you think?

Scuttlebutt: Rear Adm. Richard Cheeseman, commander, Carrier Strike Group TWO (CSG-2), relieved the commanding officer of USS Philippine Sea (CG 58) Capt. Erica Hoffmann, May 18, due to a loss of confidence in her ability to command. The Philippine Sea was at a pier at the Yorktown Naval Weapons Station on the York River on May 7 when it spilled 4,000 gallons of diesel fuel at about 7 a.m.

Hoffmann had served as the commanding officer of Philippine Sea since April 2019.  Capt. Robert Thompson, assigned to Commander, Naval Surface Force Atlantic, will assume temporary duties as commanding officer until a permanent relief is identified.

Hoffmann will be temporarily reassigned to the staff of Commander, U.S. Fourth Fleet.

Naturally, the cry of “sexist”, will be heard but rumor was that this was the last straw.