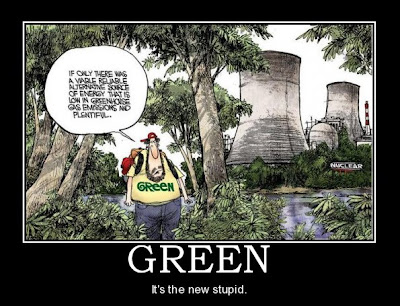 None of the new green jobs that Van Jones, President Barack Hussein Obama’s new
Green Jobs Czar
envisions are in the nuclear energy sector. So what sort of new green jobs does he have in mind for America? I’m not really sure. Van Jones’ world view was molded (by his own admission) by Frank Marshall Davis, Jeremiah Wright and Bill Ayers. He considers himself, “not only a communist but a rowdy black nationalist”.
Even in this era of liberal supremacy in the legislature, Van Jones, who said, “I was radicallized in jail”, was unlikely to be appointed to anything with Congressional oversight. The solution, of course, was for the president of the US to make him a Czar.
In fairness to Jones, he did have an environmental blog before being appointed to be Czar over Green Jobs. That, and being an ardent communist qualified him for the position. (CLICK HERE FOR MORE) He was also a Black Panther and helped organize STANDING TOGETHER TO ORGANIZE a REVOLUTIONARY MOVEMENT (STORM). (CLICK HERE FOR MORE)
No I’m not making this stuff up. As one of President Barack Hussein Obama’s close friends and advisors, he’s now one of the most powerful men in America, a czar, if you will. He has access to YOUR TAX MONEY and will spend it to promote “Green Jobs”. Green must be the new red.
The goal of the Green Jobs Czar, it would seem, is to bring about social justice. (huh?) Does this mean he’s helping General Motors C.E.O. Barack Hussein Obama to make GM a greener company?
Popular blogger, Nickie Goomba would say, “it don’t make sense.”