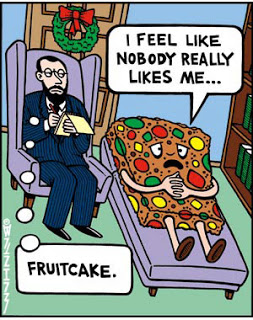 You might think from the title of this blog post, that I’ve come up with a new name for President Obama, who is gleefully anticipating his political victory as the nation slides over the “fiscal cliff”. Who would call the President a name like that? It’s absurd when you think about it. A fruitcake has nuts.
Yes, I digressed. Back to our theme.
There is only one time each year when people send other people that they actually like, food like a fruitcake (shelf life = that of a Twinkie, if Twinkies still existed, and thanks to their labor union, they don’t).
Yes, with the demise of the Twinkie, the only food remaining that will survive the apocalypse and sustain survivors is the fruitcake. That’s why people send them. Why else? 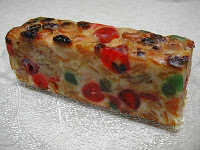 Then again, some people may be trying to save our ailing Postal Service because they are frigging heavy as bricks and they are expensive to send. And the fruitcake is one of those gifts that is frequently re-gifted, making it a double dip for the US Postal Service. Those that arrive safely at a home where they may not be re-gifted, often make their way to landfills, there to wait for the apocalypse when zombie scavengers will unearth them – two or three hundred years later – to find that they taste the same as the day that the trash truck hauled them away from the people who tossed them.
I shamelessly stole the YouTube video (below) from Race Bannon’s Blog (Race for Justice) because there are pretenders out there who feel that the fruitcake and Twinkies dating back to the ObamaNation years will not be the only thing that will survive the ‘end of the world’.