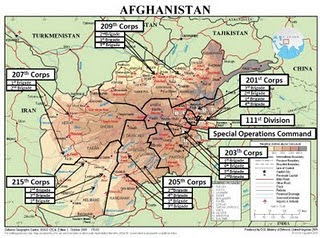 When Mr. Obama came into power, he seemed determined to make Afghanistan ‘his war’ – even though we’d been there for a long time already. Now, he’s not so sure that he wants to link his presidency to the Afghan War. And I don’t blame him. As with so many other similar conflicts throughout history, you first have to ask yourself where the end of the counterinsurgency rainbow is. And while you’re searching, consider why we went there in the first place and why we remain.
When the British left Asia and the Middle East, the US took their place and the power vacuum was temporary and rather small.  If the US suddenly decided to abandon the Middle East and Asia it would create a problem for the world and I am not suggesting that we take that Libertarian course of action. When we left Viet Nam, we didn’t leave Asia.
A 10 year land war in Asia for the sake of fighting Muslim extremists can turn into a 20 year war or a 30 year war if we plan to turn Afghans into Americans. (The Afghans have a stubborn historical precedent for remaining Afghans no matter who occupies their country) Political Islam failed to deliver on its promise of a just government. It failed to provide a prosperous society. And it has failed to foster a flourishing culture. Islam, the faith doesn’t translate into good government. Brutal Sharia Law doesn’t lead to a blossoming society full of new science and ‘the good life’. And the Afghans have their own brand of Sharia based on the jirgha (literally ‘circle’) of elders who decide what the tribe will do. It has been and will be the basis of Afghan society and law no matter how much we try to change it.
Our broad strategic objectives for Afghanistan are part of the problem. Keeping America safe can remain  a goal for keeping troops in Afghanistan at some sustainable level. However, when you look at the map (above), you need to ask yourself if Six Corps (a lot of people) will make the social change we seek by 2014. Is that the end of the counterinsurgency rainbow?