The soft drink giants have made vast fortunes catering to the world’s craving for sugar and caffeine.  They’ve elicited the very best (and most expensive) advertising brains on the planet to come up with new and more creative ways to peddle their beverages.
Many people have very serious brand loyalty to Coke and Pepsi (and by extension, their diet/light varieties). I personally feel that Diet Pepsi tastes like cough syrup – and not in a good way, so I too have taken a stand. BUT it seems that Pepsi is about to re-brand Diet Pepsi and they’re changing the sweetener to make it a bit appealing in their efforts to unseat Diet Coke. Coke currently sits #1 in the rankings (Diet Coke #2) and Pepsi is at #3. Diet Pepsi is #7,  with $5 billion in sales annually.

PepsiCo said in a statement Sunday that it was adding a “very small amount” of acesulfame potassium “to ensure consistency with every sip.” The sweeteners used in Diet Pepsi vary depending on the region of the world. The move to improve Diet Pepsi comes amid a broader push by PepsiCo to boost sales of its flagship soda.

Both Coke and Pepsi will easily cook the tarnish off a penny, making it look new, shiny and bright. I suspect that it doesn’t do quite the same thing to your innards. But neither Pepsi or Coke use that strategy to market their beverages.
But there is also international politics involved in the cola wars. Pepsi controls most of the market in the Arab World and only recently sold it’s wares in The Small Satan (Israel). In Russia, Pepsi cut a deal with the Soviet System. After the wall fell and the USSR dissolved, Coke came in and is now dominating the market as part of the New Russia.
Pepsi spun off some of it’s subsidiary restaurant holdings into Tricon Global Restaurants about a decade ago (still essentially owned by Pepsi) including Taco Bell, Kentucky Fried Chicken, California Pizza Kitchen, Pizza Hut and Stolichnaya Vodka (license agreement).
The Coca-Cola Company only produces a syrup concentrate, which it sells to bottlers throughout the world, who hold Coca-Cola franchises for one or more geographical areas. The bottlers produce the final drink by mixing the syrup with filtered water and sweeteners, and then carbonate it before putting it in cans and bottles, which the bottlers then sell and distribute to retail stores, vending machines, restaurants and food service distributors. 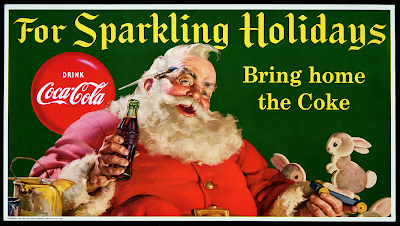 Genuine Coca-Cola is still available at Costco in glass bottles, manufactured in Mexico – with sugar rather than corn sweetner to make it taste good. An ice cold Coke on the back of my throat when it’s hot leaves Pepsi in the dust. And we all know that Santa and the crew in the north pole (including polar bears) prefer Coke.