From the Grand Mufti to You 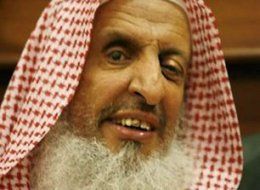 Don’t judge the holy man when he brings word from on high. Yes he may prefer ten year old girls in a sexual sense. To that extent the Grand Mufti fits well into the religious community of Saudi Arabia and he’d be a shoe-in as a professor at the University of California, Berkeley.

The Grand Mufti of Saudi Arabia ruled that ten year old girls can be married off, because in his words, “Good upbringing makes a girl ready to perform all marital duties at that age.”
The Mufti is descended from Mohammed Wahhab who gave birth to Wahhabism and whose descendants have controlled the Saudi religious establishment, and through it Islam around the world. The Saudis are not an aberration, they are Islam in its purest and truest form. That is why Al Qaeda was founded by a Saudi and why Saudis, the wealthy citizens of a wealthy kingdom, are its best recruits. It is not poverty or oppression that moves them to kill, but wealth and privilege.
Religiously, Wahhabism has done its best to recreate the “pure” Islam of its origins. Economically, oil has allowed the Gulf Arabs to prosper without reform or change. And if Mohammed were to ride out of the desert tomorrow, he would have little trouble fitting in, as soon as he developed a taste for Porsches. Anyone who wants to see the world as it was in Mohammed’s day can visit Saudi Arabia and see inbred clans, slave labor, veiled women and thugs enforcing the will of Allah on every corner.

Islam came out of the desert and it has never left the desert, instead it has brought the desert with it along with its codes, its deep hatreds, its constant deprivation, its deceptiveness and its nomadic expansionism. Where Islam goes, the desert rises along with its accompanying insecurities. It was backward even at the time of its birth and it has only become more so, but its singlemindedness is an advantage in an age of effete leftectuals and eurocrats dreaming of a transnational world.

It is brutally telling that the two centers of Islam, Saudi Arabia for the Sunnis and Iran for the Shiites, are genuinely horrifying places. Neither can remotely be associated with tolerance or human rights. It is simple common sense that the spread of Islam will make Western countries more like Saudi Arabia and Iran, rather than less like them.

There are two Islams. The real Islam of the Grand Mufti of Saudi Arabia and an imaginary Islam that President Obama talks about when he declares the US to be an Islamic Country…right…we’ll get right on that one.

I thought that our fellow blogger, Brighid, might take exception to wearing a bhurka around because it limits one’s ability to wear a cowboy hat and remain fashionable. As the photo (left) clearly illustrates, a Muslim woman can wear traditional, faith-promoting clothing and a cowboy hat, but the fashion statement doesn’t work. At least it’s not doing anything for me. Your experience may differ.

Can women ride a quarterhorse while wearing a bhurka? No. But since women are chattel, they are required by Islamic law to walk behind their husband (who may be mounted – though the traditional dress worn by Islamic males still interferes with roping and branding).

As noted below, it would seem to be perfectly acceptable for Muslim men to wear cowboy hats.