From Africa – With Love 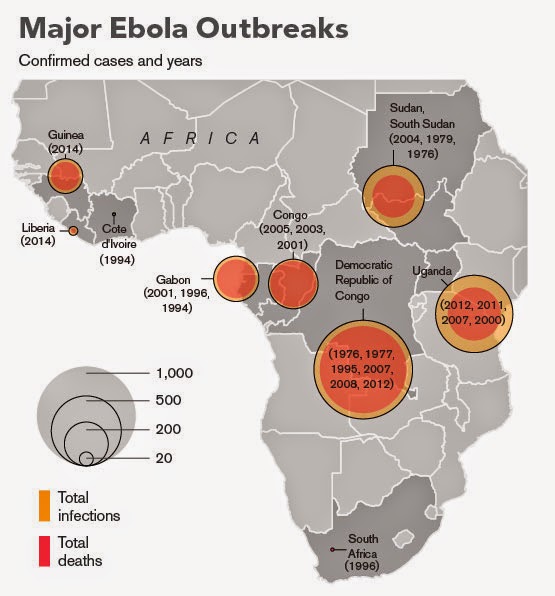 Facebook
Twitter
Pinterest
WhatsApp
The Ebola outbreak has dropped off the front pages, pushed aside by news from the Middle East and Ukraine. That doesn’t mean that hemorrhagic fever has gone away. Far from it. My solution would be to quarantine Africa aggressively. That’s not politically correct, so we go to Plan B, which is to wait until it’s unleashed on the world to get serious about containing the infection. AGGRESSIVE Containment is the only realistic way to deal with it since the ‘cure’ won’t work on a large scale (as outlined below by the CDC).

Dr. Tom Frieden, Director of the Centers for Disease Control: “Vaccines and treatments may come along, but right now what we have are tried and true methods that we have to scale up. They have worked in prior outbreaks but we are not getting to scale,” Frieden told “CBS This Morning.” “The epidemic is going faster than we are. We need to scale up our response. We can hope for new tools and maybe they’ll come, but we can’t count on them.”

Speaking to “CBS This Morning” following his trip to the West African countries dealing with the outbreak, Dr. Tom Frieden explained that they have to act now to try to get Ebola under control.

“It is the world’s first Ebola epidemic and it is spiraling out of control. It’s bad now and it’s going to get worse in the very near future,” Frieden told CBS News. “There is still a window of opportunity to tamp it down, but that window is closing. We really have to act now.”

Frieden, who visited Liberia, Sierra Leone and Guinea, will tell Washington tomorrow that the Ebola outbreak is “spiraling upward.” The CDC director explained that these countries still need help to deal with the deadly outbreak.

“We need to support countries with resources, with technical experts and with cooperation. Too many places are sealing off these countries,” Frieden told CBS News. “If we do that, paradoxically, it’s going to reduce safety everywhere else. Whether we like it or not, we’re all connected and it’s in our interest to help them tamp this down and control it.”

The World Health Organization says that 20,000 could die before the disease is brought under control.The death foll currenly tops 1500, which means we have a long way to go before we can say that the outbreak is being managed.
The US has been fortunate in avoiding the disaster, but how long can that last? The CDC director thinks Ebola’s spread to the US is “inevitable,” so it really is a question of time.